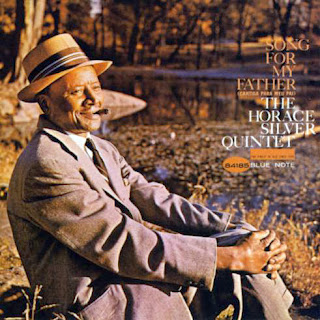 1. HORACE SILVER-"Song For My Father"
Last week the internet had poor old Horace dead, luckily his son announced through Blue Note's website that it wasn't so. Before this was confirmed I dug out my fave LP by him and gave a listen to it's title track, which has always been my fave by him and easily in my Top Ten jazz numbers. Swanky.

2. TURQUOISE-"Flying Machine"
You'd think that being managed/produced by Rolling Stone's associate Tom Keylock, friends with Keith Moon and John Entwistle and having grown up around the corner from Ray and Dave Davies that Muswell Hill's Turquoise would've been pipped for stardom, but no such luck. It's a pity as jaunty, cheery little numbers like this unreleased tune from '68 would've made a splendid 45.

3. THE PINK FLOYD-"Careful With That Axe Eugene"
For the first year or so after Syd Barrett left Pink Floyd they made some pretty decent music, this number was the B-side to their last attempt at a commercial 45 ("Point Me At The Sky") and seems to pick up where they left off with "Set Controls For The Heart Of The Sun".

4. SASCHA BURLAND-"Hole In My Soul"
Covered by the Preachers, produced by Bill Wyman and fronted by a very youthful Peter Frampton I've known "Hole in My Soul" for ages and recently decided I needed to know who originally cut the jazzy little number. It was written and recorded originally in 1961 by one Sascha Burland on Columbia on the flip side of "The Gorilla Walk" single and it swings, even though it's obviously tongue in cheek!!


5. THE SHAME-"Don't Go 'Way Little Girl"
Recently unearthed on the "Peace Poetry & Revolution" CD box set is this 1967 U.K. cover of a Janis Ian gem. Delivered cynically behind some searing guitar and a bit of sitar, this solid social commentary tune sticks in my brain easily, and yours too I hope.

6. THE KULT-"No Home Today"
A one off 45 from 1969 on the (U.K.) CBS label, "No Home Today" first came to my attention via "The Perfumed Garden Volume Two" nearly 30 years ago. Built on some powerful chords, sweeping choral backing vocals and subtle raga guitar licks it's release date is deceptive as it could've easily come from 1966. If you've got an original it's worth a few hundred dollars!

7. HAMILTON & THE MOVEMENT-"I'm Not The Marrying Kind"
A punching soulful tune from the pen of Bill Wyman and Moon's Train leader Peter Gosling. With all the shagging he claimed he did in his autobiography one wonder's if this wasn't Wyman's attempt at a Graham Greene like confession to his missus?!  Hard to imagine The Stones doing this.

8.THE ROLLING STONES-"No Expectations"
Speaking of...... One of the last Stones sessions to feature Brian Jones (on some magnificent slide guitar) it's a touching and poignant track based on that fact alone but in my estimation it's their last good blues track. Nuff said. 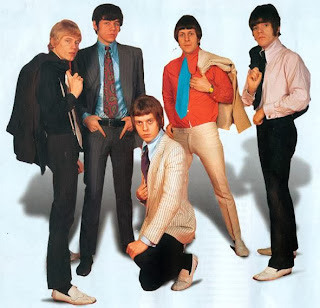 10. THE MOVE-"Useless Information"
One of The Move's finest moments is this number from their untitled 1967 debut LP chock full of precision harmonies and a perfect vehicle for the amazing two headed vocal monster that was Roy Wood and Carl Wayne driven along by the incredible rhythm section of Ace Kefford (bass) and Bev Bevan (drums).

Hi. I stumbled upon your blog trying to track down a song. My dad has been trying to find a version of "Hole in My Soul" for probably decades and he's been driving everybody he's ever met nuts with it, so it's become sort of a fun, obsessive hobby for me as well. :) Do you happen to know of other versions? He maintains it wasn't Burland's, Wyman's, or the Preachers' version that he used to listen to in the 60s. He recalls it being a little slower, more mimimalist, and with a laid-back vocalist similar to a Jack Sheldon tone. So far your blog is one of the few sources I've found that seems a little knowledgeable about the song, so thought I'd reach out. Thanks for posting! I enjoyed reading what you wrote!