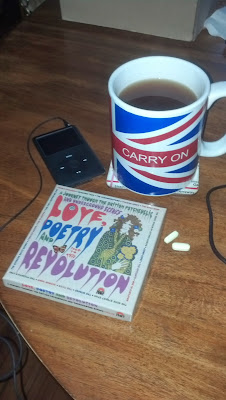 Ever since Mod Fun's Mick London and Ron Rimsite urged me to check out Bam Caruso's "Rubble.." series in 1985 my life has been forever entwined with obscure U.K. 60's "freakbeat" and/or "psychedelia".  Since that time I have purchased a multitude of comp LP's/CD's in the genre and all too often there's a lot of track overlap.  When "Love, Poetry & Revolution: A Journey Through The British Psychedelic And Underground Scenes 1966-1971" was announced I was hesitant as a great deal of tracks (23 to be exact) I'd already had in a variety of places.  But the rest looked intriguing. It semmed to me to be a perfect companion to 2006's mighty 4 CD "Real Life Permanent Dreams: A Cornucopia of British Psychedelia  1965-1970" set and I duly pre-ordered it.  Repeats aside (Mirage, Jason Crest, John's Children, Sands, Mike Stuart Span, Crazy World of Arthur Brown etc) my mind was suitably blown and continues to do so....The liner notes by Tenth Planet man and all round U.K. 60's scholar David Wells are spot on and informative. It's like taking a university course in U.K. 60's psych/freakbeat.  Did you know that The Shy Limbs (of "Love"/"Reputation" fame) included Greg Lake and Robert Fripp in their ranks?  Or that members of the Flies and The Cymbaline joined forces in 1969 as Infinity? Or that The Mirage backed Caleb (Quaye) on "Baby Your Phrasing Is Bad"? And that's just a taste...In an effort to reign in my enthusiasm fueled long winded-ness I'll keep this brief (yeah like that's gonna happen) and give you some of my fave pics from each disc.

DISC ONE:
Deep Feeling (formerly known as The Hellions) and home to pre-Traffic Dave Mason and Jim Capaldi (in addition to pre-Art/Spooky Tooth member Luther Grosvenor) open the comp with the unreleased 1966 song "Pretty Colours", with it's "Mars, Bringer Of War" intro and a lysergic percussion charting the journey from mod/r&b to psychedelia perfectly. And on that similar path is the gem of the set, an acetate recording by Tintern Abbey, responsible for the greatest U.K. psych single of all time ("Beeside"/"Vacuum Cleaner"). "Busy Bee" is an acetate demo of "Beeside" before the band got to utilize studio gimmickry and create their sole 45.  "Busy Bee" is just bass, drums, one guitar and vocals on the famous Oak acetate label.  To me, as mentioned in last month's picks, this track perfectly illustrates the period where The Who-ish/Creation crunch of mod/freakbeat gave way to sugar lumps and mind bending technicolor. Worth the price of the whole set in my book! The Shame's 1967 Janis Ian cover "Don't Go 'Way Little Girl" is a nifty little number with some raga fuzz licks and bleak lyrics that are pretty deep for '67 (it even got a US release on the obscure Poppy label).  One In A Million (responsible for two highly recommended and costly 45's in '67) offer the unreleased "Man In Yellow" a choppy, tough little mod/power pop number not at all dissimilar to The Game or The Barrier.  We here at "Anorak Thing" as you may have read a zillion times are fascinated by that period where all the modernist Stax/Motown loving Ben Sherman crew popped a tab and put a bit of fairy dust in their music.  In that line of thinking comes The Alan Bown , formerly The Alan Bown Set, a 7 piece soul/r&b combo who lived at the Marquee and couldn't catch a break no matter how tight they were. Their 1968 single "Storybook " (their second for the new label, MGM and new image) features a mix different than that on their LP thanks to some trippy effects on the intro.  The band still sports the souful Jess Roden on lead vocals, high Action style backing vocals, Hammond organ and flute/sax backing....then the breathy backing vocals, reverberating voices, Middle Eastern sounding horns and Mellotron tells us Rufus Thomas missed the bus and no one's going back to pick him up...magic. The disc closes with the surprising folky "Child Of The Sky" from England's favorite counter culturists The Deviants, not at all what you'd expect from what one wag called "The Limey MC 5".

DISC TWO:
The West Coast Consortium, best known for their Association on six bags of sugar sound offer the almost CS & N plus Mellotron laced unreleased psych pop ditty "Amanda Jane" full of lyrics about tricycles and playgrounds. The Flies unreleased  jaunty piano/organ driven "Winter Afternoon" is perfect as I sit here typing this out in Lower Binfield and the snow is coming down and bending the three story tall pine tree outside my window under it's rapidly accumulating weight.  "Jabberwocky" by Peter Howell & John Ferdinando comes from two gents (Howell  was later of the BBC Radiophonic Workshop, and responsible for updating the "Dr. Who" theme) who cut an LP in 1969.  Their musical reading of the Lewis Carroll poem was not groundbreaking as Pink Floyd chum and London Free Clinic doctor Sam Hutt already cut a suitably trippier version in '68 as Boeing Duveen and the Beautiful Soup.  But this version is far folkier, and not at all unlike something from Duncan Browne's "Give Me Take You" elpee, but with some subtle psychedelic bits.  Forever Amber were responsible for one of the rarest LP's of the genre (the 99 copies pressing "The Love Cycle") and touted by cutie Zooey Deschanel in "Mojo" as her fave LP.  "Bit Of Your Life, Bits Of My Life" is not unlike a bargain basement "Odessey And Orcale" era  Zombies, and to date the only track I know by these guys.  Maybe someday I can pop by Zooey's and have a listen to the rest. "Strange Ways" by Please, an unreleased '69 tunes sounds like The Flies late era, possibly because they were led by their former lead vocalist Pete Dunton. The Liverpool Scene's unissued '69 cut "We'll All Be Spacemen Before We Die" makes use of some great NASA control chatter and rolls into a heavy,wah wah pedal monster with a vocalist who sounds like a cross between Danny the Dealer and Al Stewart reciting beat poetry while being backed by The Pink Floyd '66, got that?  Good. "The Makers" by The Sorrows comes from their Italian only  LP "Old Songs New Songs" (butchered in the 80's by the dodgy Gallic label Eva as "Sorrows In Italy"), with heavily Anglicized lead vocals and funky heavy Small Faces '68 musical backing . Cool till it starts to exceed 4 minutes mark. Second Hand, responsible for the mind numbing , apocalyptic "The World Will End Yesterday" serve up a distinctly unlike them pop-psych demo "A Fairy Tale", a slice of Mellotron twee pop psych not unlike Wimple Winch's late era demos. "Love" by the Shy Limbs has been a fave ever since it was unearthed by Strange Things Are Happening's first "Circus Days" CD comp in the early 90's. Propelled by driving throbby John Entwistle/Ace Kefford style bass from Greg Lake (who also supplied the soulful lead vocals) and searing guitar licks(c/o Mr. Toyah Wilcox Robert Fripp) and crashing into an amazing blissful chorus, it's always been a string track to these ears. Lake and Fripp soon absconded to form King Crimson. "Tomorrow Today" by ex-S.D.G. members (Eddie) Hardin & (Pete) York is a big fave here at "Anorak Thing" manor and this Hammond/tambourine fed track with some gorgeously soulful female backing vocals gets lots of airings!

DISC THREE:
Disc three is a bit too "mellow" for me really, some bargain basement Bill Fay's and "heavy" stuff that's possibly not sounding as good as it could for me in my present, lucid, straight weekday state.  Naw wot I meahn? Taiconderoga's (yes it's spelled like that!)  heavy take on "Whitchi Tai To" threw me for a loop as I'm used to the John Schroeder muzaky version.  This version awash in tabla, phlanged guitar (courtesy of a teenage pre-Damned Brian James) is not bad at all but I'm sure this hippie dirge was a skeleton in Mr. James closet in '77! Hawkwind Zoo (aka Hawkwind) contribute an unreleased '69 mid tempo mantra "Hurry On Sundown" full of some good raga riffs and a groove for the oh-so-stoned cut before they snipped the "Zoo" from their moniker. Fut's Fab Four-esque psych parody (complete with Scouse accents)  "Have You Heard" has seen issue in lots of issue in other places and is in reality the work of Maurice Gibb, Aussie ex-pat duo Tin Tin and Mo's then brother in law (and Lulu's brother) Billy Lawrie, no matter how many Beatles bootlegs it's been on.  The Fab Four sound is so spot on that the liner notes indicate that the Dragon Lady attempted to register it as a Lennon track in 1985, silly cow. From the "from the 70's but sounds 60's" comes the magic of Octopus and their Badfinger-esque "Rainchild", don't own their LP "Restless Night"?  Go forth and get it. Beau's "Creation" from an LP on John Peel's short lived Dandelion label is firmly in the "from the 70's but sounds '60's" category (1971 actually).  It would've sounded quite a home in a late 60's/early 70's Hammer film! Uncredited on the sleeve comes Lol  Coxhill's "I Am The Walrus" which is a group of small group of English children singing the Fab's track with flute and Monk-ish piano.  Lol was a late British sax player who'd been part of Kevin Ayer's and the Whole Wide world as well as spending a spell in Welfare State. That was quite weird, there's hope for my four year old's Syd Barrett-eque tunes yet.....
By Wilthomer - December 10, 2013

Glad you reigned yourself in...

This collection got rubbished in The Independent last Saturday so thank you for a more detailed overview. The first two discs sound essential for those of us who like the crunchier end of UK psych. Now go to the back of the class for mucking up the first name of the drummer in the SDG? Only kidding Bill.

The only thing I want more than the comp is that mug.