Sixties London night spot live sensations Jimmy James and The Vagabonds never troubled the hit parade in the U.K. but that didn't stop their U.K. label Piccadilly from issuing a slew of 45's there. Managed  by  mod kingpin Peter Meaden, who became their manager after being eased out of that role for The Who, they were a  band of musos oiled into a well drilled r&b/soul machine after initially playing ska/calypso. Like Geno Washington & The Ram Jam Band they worked hard, gigged daily, put on some energetic shows but fame remained elusive for them, no doubt like Geno et al owed to the fact that their material was for the most part, covers of U.S. soul/r&b. 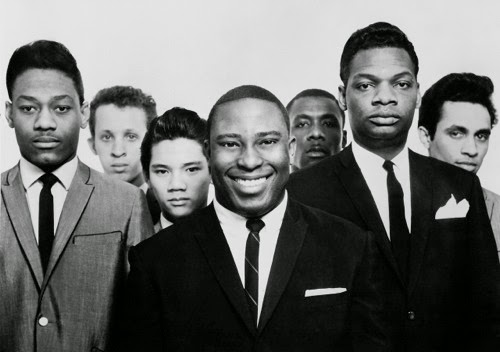 This was their third single in the States, their second on Atco (who also released their LP "The New Religion"  as Atco SD 33-222 in 1967). A good year before Tony Tribe's reggae-fied version Jimmy James and Co. covered Neil Diamond's March 1968 track "Red Red Wine". It was released in the U.S. in September 1968, three months after the U.K. issue (their first on the Pye label as 7N 17175 ) with a different flip than it's U.K. counterpart utilizing the their previous G.B. A-side "No Good to Cry" as the underside here.

"Red Red Wine" is delivered in a slow orchestrated manner.  It's not a bad tune and Jimmy James certainly has a great voice but it's purely M.O.R. stuff.  The real guts are on the uptempo soulful B-side "No Good To Cry".  The number was originally cut a year earlier in the U.S. on the Cadet label (5561) by a white soul band called The Wildweeds, once again illustrating the continuing "cover band" issue.  Jimmy James and the boys pull out all the stops but pretty much stick to the original arrangement, the only difference being the production on the Vagabonds version is a bit better but it's unfortunately nowhere near the original!

Both sides have been issued in a variety of compilations as Castle, who owns Piccadilly/Pye is pretty easy with their licensing. The best place is on a double CD of their material "Sock It To 'Em J.J.: The Soul Years" that is still in print and collects the best of their Piccadilly/Pye material.