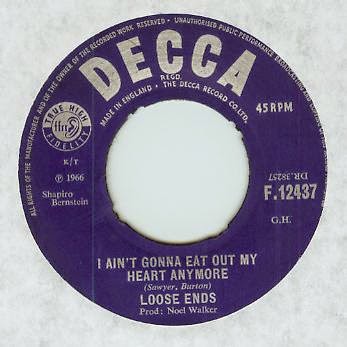 1. THE LOOSE ENDS-"Ain't Gonna Eat Out My Heart Anymore"
One of my favorite examples of freakbeat is this U.K. 1966 cover of The Young Rascals 1965 track on Decca. The vocals take a snatch of Jagger vitriol and dash it with some soul, pile in a blistering, distorting lead guitar solo and this, my friends, is what freakbeat is all about.

2. THE POPPY FAMILY-"No Blood In Bone"
I stumbled upon this trippy number while watching a movie earlier this month and Shazam-ed it and lo and behold it was from The Poppy Family, a one hit wonder duo famous for "Which Way You Going Billy" (second in playground serenades by classmates to me to "Billy Don't Be A Hero" in the early 70's). The number has a wigged out vibe with it's psychedelic intro and immediately lapses into this funky groove with electronic strings, throbby bass, fuzz guitar, groovy organ and lots of phlange! And it has a damned infectious groove!

3. JUNCO PARTNERS-"Natural Thoughts"
From their untitled 1970 LP which has appeared recently on iTunes comes this hard driving number that my pal Ivy Vale turned me onto a good 20 years back that is not at all unlike The Small Faces '68 in parts with soulful vocals, a driving rhythm section and some balls.

5. SIMON & GARFUNKEL-"Patterns"
Besides coming back with a fake British accent after his brief month long hiatus across the pond Paul Simon also came back with a deep appreciation for Davy Graham, Bert Jansch and "Eastern" tinged folk music. This number from their "Parsley Sage Rosemary and Thyme" album has an Eastern slant to it with tabla, Graham style guitar licks and a very British '67 pop/psych feel to it. Originally cut by Simon and the other guy on their '65 LP "The Paul Simon Songbook" it was re-recorded following Simon getting "tuned in" and (perhaps) "turned on".

6. JETHRO TOE (TULL)-"Aeroplane"
This is the flip of the 1968 debut 45 by those flute driven hippies (with their moniker deliberately sabotaged on the label credits by their producer who thought "Jethro Toe" wasn't as naff as "Jethro Tull").  Believe it or not it's a great mid tempo number that sits somewhere between The Moody Blues and Jason Crest, wonderfully produced with some jazzy little tinges.  Wow!

7. DUFFY POWER-"Red White And Blue"
One of the crown jewels of RPM's Duffy Power compilation "Vampers And Champers" (also released previously as "Just Stay Blue" or "Little Boy Blues"), a collection of unreleased mid 60's tracks cut by the master himself is this brilliant little track.  Soulfully wailing above some jazzy stand up bass, jazzy little guitar licks and some mild drums (and a harmonica solo, naturally) this number epitomizes "cool" in my book.


8. THE MOVE-"Can't Hear You No More"
Unearthed on a tape for their "Anthology 1966-1972" box set the pre-record contract Move (at the height of their soul covers period) cut a great "beat group" version of Betty Everett's classic for this radio session from January 1966 shortly after the groups formation.

9. MIKE SHERIDAN'S LOT-"Take My Hand"
Speaking of The Move....this September 1965 single by Mike Sheridan's Lot (Formerly Mike Sheridan and the Nightriders) features the talents of Roy Wood on lead guitar and vocals (distinctly noticeable on the chorus but singing the whole number in tandem with Mike Sheridan) before he cut one more single with them and jumped ship to start the Move.  This number is British 60's beat group perfection in my book.

10. GENE CHANDLER-"(Gonna Be) Good Times"
In my book the ultimate 60's r&b/soul anthem is not "The IN Crowd" by Dobie Grey but this one by Gene Chandler from 1965 on Constellation records:
"Early evenin' and the weather's fair, dark glasses and don't give a care,
Finger popppin' out on the street all dressed and neat".

You saved the best for last. I love that Gene Chandler song. I can almost imagine the Stones doing a cover circa "Out of Our Heads"