The Action: Just When I Thought I Had It All They Pulled Me In Again..... 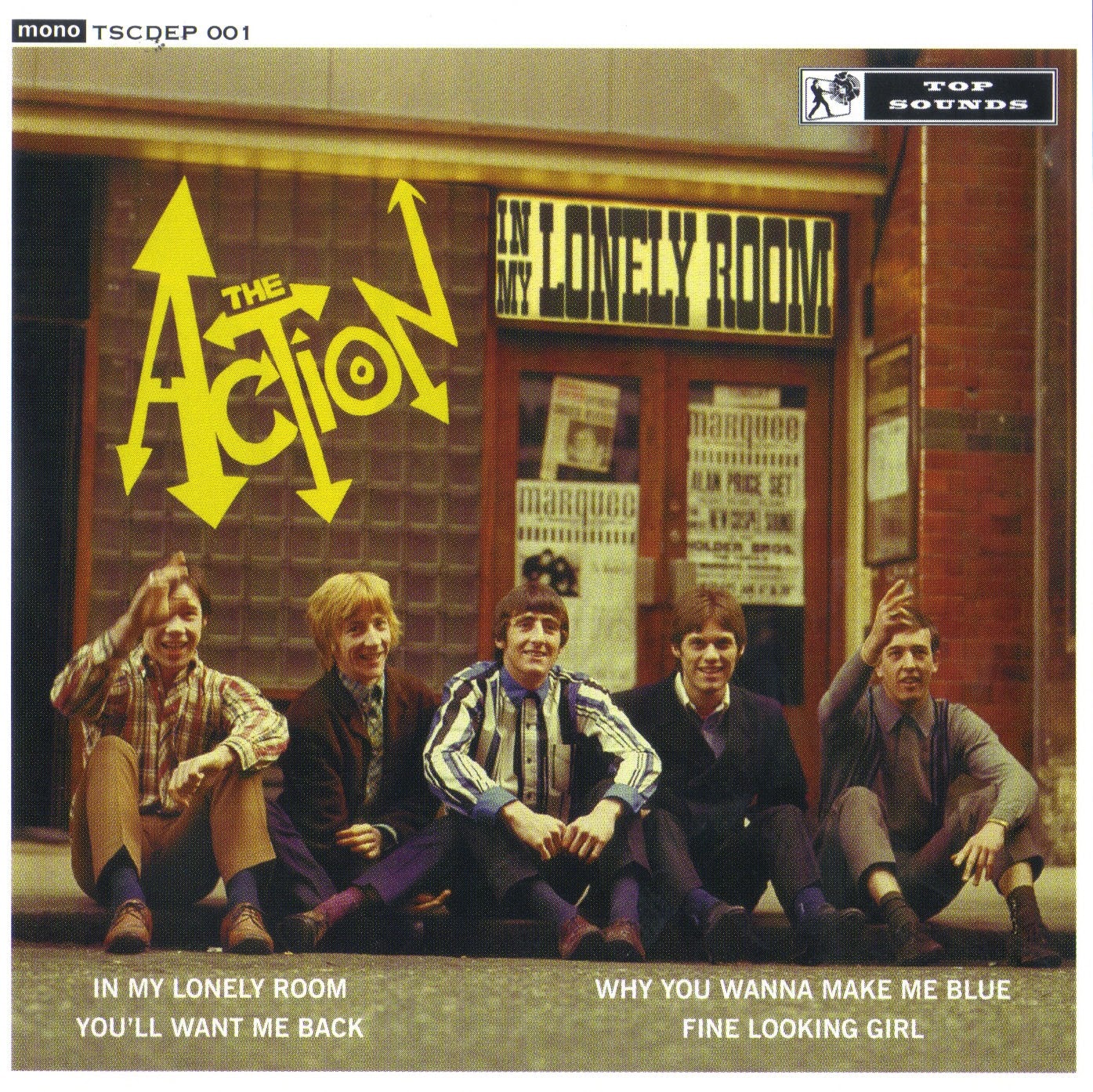 Few here in the States are as Action-mad as me.  They're always in a neck and neck race for the #1 slot of "favorite bands" with The Small Faces for me.  And like The Small Faces whenever new material, alternate mixes etc are discovered out comes the credit card and no matter what I have to have it.

The good folks across the pond at Top Sounds have put out a wonderful 4 song E.P. of previously unissued tracks in both the 10" vinyl format and on a CD E.P. with a stunning cover and a multitude of photos, clippings etc reminiscent of the old Edsel records LP's on an insert with liner notes by Nigel Lees.

The four cuts contained within come from a variety of sources. The version of Martha and The Vandella's "In My Lonely Room" is not the same cut that was their debut single (Parlophone R 5354 October 1965) but an altogether different recording. The source of it's origin is under speculation.  It's quite possible by the degree of echo and the "live" feel to it all that the band were either doing a run through in the studio or (more than likely) a rehearsal or sound check in a large hall (an absence of crowd noises leads one to suspect it was not in front of an audience).  Regardless it's magic.  From Pete Watson's trademark 12 string Rickenbacker intro meshing with Alan "Bam" King's Rickenbacker 6 string chords to the confident/soulful lead vocals by Reg King (not to mention Roger Powell's dynamic drumming and Mike Evan's subdued but fluid bass lines) this is the 100% proof that those of us too young to have seen them live in the 60's that The Action were a band to be reckoned with.  The backing harmonies are spot on and it's now quite easy to understand why a lot of their 60's fans were somewhat dismissive in subsequent mod tomes about how their records failed to capture their onstage  power.

Their take on The Temptation's "Girl (Why You Wanna Make Me Blue)" was previously only issued as a bonus one track 45 along with the limited deluxe edition Action book "In The Lap Of The Mods" where it came as a  facsimile demo 7". It was recorded as a demo for Decca records with the intent of enticing in house blues champion Mike Vernon( producer of The Artwoods, John Mayall etc). Amped up considerably faster than the original it bears the trademark Action stamp of soulful harmonies and Pete Watson's one man 12 string guitar orchestra which beautifully transposed brass and strings via chiming notes on a Rickenbacker. Never content to just do note for note covers once again this is The Action taking a number and making it their own. Also cut for the Decca demo session is an number previously unheard before now, a version of The Impression's "You'll Want Me Back" (B-side of the famous 1963 single "It's All Right"). Again the dual Rickenbacker attack and soulful harmonies of the band weave their magic and surprisingly they actually slow the number down a bit more than the original making the jazzy/uptempo original into an impassioned blue eyed dirge.  The vocals are a real treat on this one.  Reg King's vocals have never sounded stronger. The final track, "Fine Looking Girl" is a Reg King original composition cut in late 1964 as a demo when the band were still known as The Boys.  The acetate source is in pretty rough shape and there's some interesting tempo changes, both of which remind me quite a bit of Davy Jones (nee Bowie) and The Lower Third's R.G. Jones 1965 demo recording "That's A Promise".

Those interested can head on over to Heyday records and get yourself one before they're all gone as previous places I'd intended to link are all out of theirs!

Hear "Girl (Why You Wanna Make Me Blue)" by The Action:

The gift that keeps giving. The Impressions track is the one that gets me here. Those harmonies!