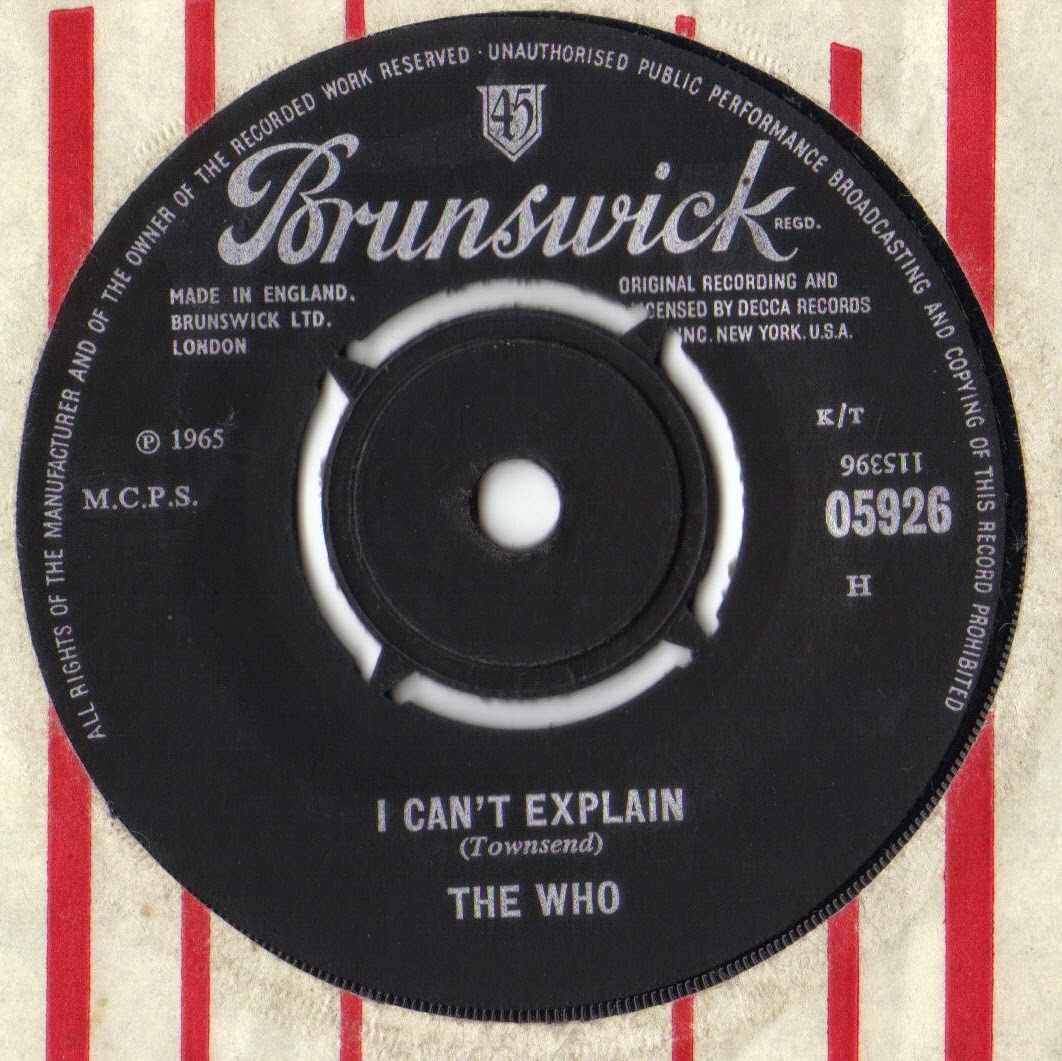 When the Who (who'd recently reverted back to "The Who" moniker after a spell as The High Numbers) were signed the the Decca offshoot Brunswick in late 1964 they set about recording with the then maverick American producer Shel Talmy at Pye studios in London in September of 1964 working on what what be their debut . Talmy had been producing the Kinks since February of that year (an irony not lost on many) and was sought out by Who managers Kit Lambert and Chris Stamp specifically for that reason. With a simple power chord pprogression of E-D-A chiming from Pete Townsend's Rickenbacker one could easily spot The Kinks influence on the simplistic yet ear catching track that was virtually the birth of power pop. From the high backing vocals (courtesy of U.K. harmony backing trio The Ivy League) , drummer Keith Moon's manic yet disciplined (for Moon anyway) backbeat, Pete Townsend's improvisational jazzy solos (not one but two!) and Daltrey's confident swagger the number has all it needs to became not only dance floor friendly but easily stands the test of time as one of the most powerful records of it's time.  Indeed when it was launched the U.K. Top 10 was awash with the usual crap like Gene Pitney, Cliff Richard, Freddie and The Dreamers (though Georgie Fame & The Blue Flame's "Yeh Yeh" was #7 so it wasn't all hogwash) there was nothing like it in Britain, or anywhere else for that matter.

"I Can't Explain" launched The Who and their debut appearance on Rediffusion TV's famous "Ready Steady Go" program played no small part in it. When the band appeared on television sets across Britain on the evening of Friday January 29th 1965 the match was lit to the powder keg.  It didn't matter that the band mimed on that particular appearance as manager Kit Lambert had stacked the deck by flooding the studio audience with mods from the Marquee club after talking producer Micheal Lindsay-Hogg into giving him 100 tickets to dispense free to the band's "fans".  Sadly there is no footage in existence of the performance but one can only imagine the raucous reception the got when at just two minutes and five seconds the number ended. Judging by the band's smart attire to match their two minutes plus opus to teenage angst one doesn't have to imagine the audience reaction. Pirate Radio picked up on it from the get-go and quite soon it was bubbling into the lower reaches of the U.K. charts at #45 in February.

"I Can't Explain" eventually became the band's first chart hit, though a slow boiler at that it's highest chart placing in the U.K. was finally at #8 in April.  Sadly there is little footage remaining of the band playing it other than a recording made live in a TV studio in Twickenham on August 3rd along with versions of "My Generation" and "Daddy Rolling Stone" (with screams later dubbed in) for broadcast on the American TV show "Shindig" (aired on Saturday October 2nd)  which can be viewed below and a promo film made by managers Kit Lambert and Chris Stamp (also below).

Interesting it had a US before UK release. Never realised that. Ta.