This was the second of four single's from a U.K. r&b quintet known as Felder's Orioles that was released in October 1965 (their previous/debut single "Down Home Girl" b/w "Misty" was released in October of that year as Pye 7N 35247). I will have to admit that I was rarely impressed with much of the Felder's Orioles stuff that I had heard.  That was until I came across the magical jazzy/r&b swing of "Sweet Tasting Wine".  It's got it all, groovy combo organ, solid brass that swings, soulful lead vocals and precise backing vocals. It's a phenomenal cross between "Them Again" era Them meets Georgie Fame & The Blues Flames and The Animals.  Brilliant. AND to top it off it came from the pen of our fave tunesmiths Tony Colton and Ray Smith!!

The flip "Turn On Your Lovelight" is somewhat pedestrian.  Sure the band can wail and they're tight but the vocals sound a bit strained and let's face it no one's really going to do anything monumental with this number. 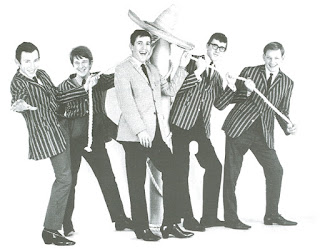 Criminally "Sweet Tasting Wine" never made it onto any of Sequel/Castle records "Doin' The Mod" CD compilations which is a damn shame since "Turn On Your Lovelight" was on their first volume "The Go Go Train"!!

Hear "Turn On Your Lovelight":