The Moody Blues Mark One: In America Part Five

"Ev'ry Day " ("Everyday" in the U.K. as Decca F12266) was the second U.S. Moodies 45 to feature original band compositions on both sides (the previous was written about here). It was their fourth U.S. release.

"Ev'ry Day" is a brilliant little pop tune from the pen of Denny Laine and Mike Pinder. It starts out with a great acoustic classical guitar bit that continues throughout the song and features the band's usual amazing harmonies (especially in the call and response chorus parts). There's so much going on in it and just as you get into it bang at 1:48 it's over!


"You Don't" on side B ( titled "You Don't (All The Time)" in the U.K.) is another Laine/Pinder tour de force accented by some flute by Ray Thomas, the bands trademark vocal abilities and some atmospheric phlange on the piano. Both sides benefit from the masterful production of Denny Cordell who makes the most of the bands stellar vocal abilities and muso musicianship. Sadly the number only reached #44 in the U.K. (their last chart placing in Britain before their revamped '67 line up) and an even more dismal #98 in the States. Their next U.S. single (which was not issued in the U.K.) can be found by going here. 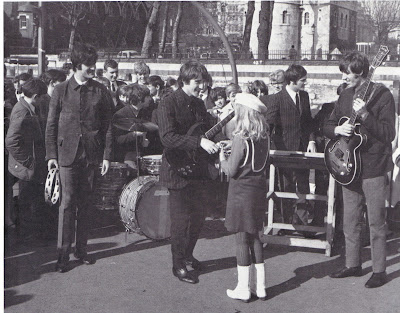 Both sides can be found on the London/Deram deluxe edition CD of their debut LP "The Magnificent Moodies" as well as the more recent and highly recommended deluxe two CD edition (which contains a live BBC version of  both tracks as well).