What is "mod"? What makes an album "mod"? That argument has troubled message boards, Internet forums, social media and boozy post gig gatherings for eons. Is a "mod" long player one that was recorded by a group of people who were mods or was it made by a group of people beloved by mods or even made by a group of people who weren't mods  but specifically recorded it with mods in mind?  Too many questions and the answer is pointless because as Billy Harner observed in his groovy soul side "What About The Music? and that's what we're here for. To me "mod"  is in the eye (and more importantly the ear) of the beholder and to my eyes and ears it's the 1960's on both sides of the Atlantic from the American music that spawned it to the British music that was influenced by it and made it their own. I have been on this wild ride called "mod" since 1980 so my musical tastes have been all over the place. I recently was contacted by Adaptor Clothing and asked what my top 5 mod albums would be for a piece they would be doing on their Instagram account.  Picking 5 long player's was no easy task so I just went with ones by some of my favorites that encapsulated what it was all about to me. Read on squire. 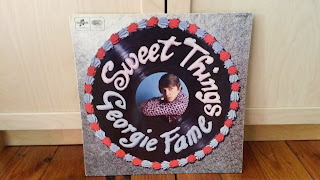 1. GEORGIE FAME & THE BLUE FLAMES-"Sweet Things" U.K. Columbia SX 6043 1966
My intro to Georgie Fame came via a "Ready Steady Go" VHS tape in 1984 and a crusty 45 of "Yeh Yeh" that belonged to a friend's dad.  Shortly after I sprung for a copy of "20 Beat Classics" and it was on. But for me Fame's most "mod" LP was a toss up between his debut LP "Rhythm And blues at The Flamingo" and "Sweet Things" (I honestly decided which one to profile here by flipping a coin). "Sweet Things" was Georgie Fame's third U.K. LP (released in the States in an altered form as "Getaway") was also his last with the Blue Flames AND his next to last with Columbia records before moving to the more M.O.R./full on jazz sounds with CBS. For me it perfectly epitomizes "mod" as it weaves little bits of a patchwork of songs and styles that I have come to believe original 60's mods enjoyed. Just a run down of the track selection culled from American soul labels should be enough to get the idea:  Motown (The Spinners "Sweet Thing" , "My Girl" and Stevie Wonder's "Music Talk") , Chess (Billy Stewart's "Sitting In The Park") , Stax (Rufus Thomas "The World Is Round" and The Mar-Key's "Last Night"), Atlantic (Don Covay's "See Saw") to a host of other US soul/r&b groovers (Joe Hinton's "Funny", " The In Crowd", Sam Cooke's "It's Got The Whole World Shaking" and Lee Dorsey's "Ride Your Pony") and even ska (a cover of the randy Lord Kitchner ditty "Dr. Kitch"). None of them were note for note copies of the originals and were all delivered in the celebrated "Hammond n' horns" recipe that made the band famous and beloved of modernists then and now. 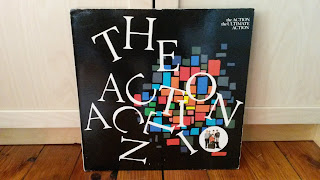 2. THE ACTION-"The Ultimate Action" U.K. Edsel ED 101 1980
Back in 1984 here in New Jersey/New York no self respecting mod worth their salt would be without a copy of this collection of singles and unreleased material by the 60's U.K. mod band The Action (along with Georgie Fame's "20 Beat Classics" and The Artwood's Edsel comp "100 Oxford Street") . The bonus at the time this came out for most mods was it had liner notes by Paul Weller( where he namechecked other 60's "mod" bands who I would later discover). Produced by the legendary George Martin The Action released 5 singles in Britain on Parlophone from 1965-1967, none of which were hits. The band drew from a host of American soul/r&b sides from better known artists like The Temptations, Martha and the Vandellas or to more obscure ones like Maurice & The Radiants or Mickey Lee Lane. Like Georgie Fame their covers were interpretations, not carbon copy attempts at the originals and they benefited from having in their line up one Reg King, possibly one of the finest soul singers Britain ever produced.  The Action introduced me to a side of American soul music I might not have heard had they not recorded Maurice & The Radiant's "Baby You Got It" or Mickey Lee Lane's "Hey Sah-Lo-Ney" that set me on a course to seek out all the 45's they covered. With shifting times and tastes in late 1966 The Action became strongly influenced by West Coast American sounds like The Association and produced (in my estimation) their finest single (and their last) "Something Has Hit Me" (written by Americans Tandyn Almer and Larry Marks) and backed with the magnificent "Something Has Hit Me" penned by lead singer Reg King and journalist Nick Jones. 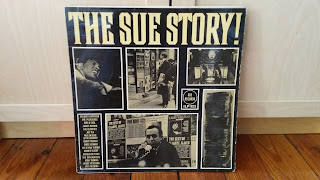 3. VARIOUS ARTISTS-"The Sue Story" U.K. Sue ILP-925 1965
God bless Guy Stevens. Though more famous for being a producer of legendary rock n roll albums our focus on Guy is when he was an uber American r&b obsessed DJ at the legendary London mod Mecca The Scene and for setting up a U.K. branch of Sue records with Island records supremo Chris Blackwell. Stevens was also famous for making tapes of his famous record collection (for a fee) for British bands to cover obscure American sides. Though many of the releases on the U.K. Sue label were just British issues of American sides he went one step further and took some liberties releasing 45's that had no connection with the U.S. label (James Brown, Otis Redding, Screamin' Jay Hawkins, Lightnin' Hopkins etc) and continued to do so until early 1967. Sue (the U.K. sort) is a label I only became interested in over the past decade or so (sadly for my wallet) but it seems to me to be a perfect case of a label geared towards U.K. soul/r&b aficionados and well...what sort of people in Britain back then were mad about this stuff? Mods. In 1965 Stevens compiled 16 tracks as "The Sue Story" an interesting mix of U.S. r&b/soul sounds for exactly those sort of fans. Interestingly only one track was culled from a U.S. Sue release (Ike and Tina Turner's "I Can't Believe What You Say") and a vast majority of the tracks were issued in the U.S. long before 1965. They ranged from James Brown's "Night Train" (1962),  Bobby Peterson's "Rockin' Charlie" (1960) to Bobby Parker's "Watch Your Step" (1961) to Donnie Elbert's "A Little Piece Of Leather" (1965) to  Bob & Earl's "Harlem Shuffle" (1963) to name but a few ultimately creating possibly the most varied and original compilation in the U.K. geared towards modernist leanings. 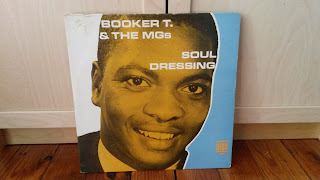 4. BOOKER T & THE M.G.'s-"Soul Dressing" U.S. Stax 705 1965
Booker T & The MG's came into my axis thanks to "Green Onions" on the "Quadrophenia" soundtrack double LP. I bought "Soul Dressing" because of its cool looking cover. This second album by these Memphis instrumental supremos was long in coming as keyboardist Booker T Jones was a full time student at Indiana University and did most of his recording during breaks and the Summer (their first, "Green Onions" had been released nearly three years prior). By 1965 Jones was finished school and the band released "Soul Dressing" containing 12 cuts, 11 of which were group originals (the sole cover being Don Covay's "Mercy Mercy"). Kicking off with the funky title cut led by Jone's Hammond and guitarist Steve Cropper's distinct twangy Fender Telecaster (previously issued as a single in July 1964) the album oozes cool thanks to it's soulful sounds with a slight jazz undercurrent and assistance from a horn section which not only adds to the jazzy vibe but gives them a fuller touring soul band sound.  It was massively digested in Britain with mod/r&b legend Georgie Fame and the Blue Flames covering the upbeat "Outrage" as the flip to 1965's "Something" 45 and The Small Faces recording the distorted/raw "Plum Nellie" (which would surface on their second Decca album "In The Beginning") where Cropper's buzzing guitar completes with Jone's churchy organ and sharp horns bring up the background. "Big Train" builds on the "Green Onions" formula and "Night Owl Walk" is positively jazz territory (the first time I heard it I mistook it for a Hammond B-3 jazz artist!). And of course the sleeve is an arty/minimalist masterpiece in itself in just three colors. 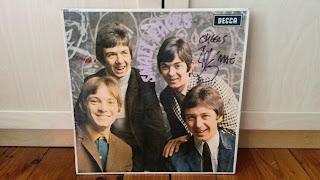 5. SMALL FACES-"Small Faces" Decca LK 4790 1966
The debut album by the Small Faces was recorded with "new" keyboardist Ian "Mac" McLagan (who replaced original member Jimmy Winston who features on a few of the album's tracks) and released in May 1966 . Winston shares composing credits on  three tracks on the platter so it's safe to say he's on those. It contains 12 tracks and was padded out by the band's debut single "What'cha Gonna Do About It" and their third single "Sha La La Lee" (Mac's debut with them released in January) . Opening with a rousing version of "Shake" sung by bassist Ronnie Lane it's a tour de force of what was pretty much the band's live set in parts. This is perfectly validated by the inclusion of extended improvisations like "Come On Children", the storming but brief 1:46 long organ instrumental groover "Own Up Time" (allowing new boy Mac to flex his Hammond organ chops), "E Too D" with it's demonic chanting in the back ground building on lead singer Steve Marriott's white boy soul belting and the rip off of Muddy Waters "You Need Love" (titled "You Need Loving" here) where Robert Plant would replicate Marriott's wailing "wayyyy down inside.." syllable for syllable on Led Zeppelin's "Whole Lotta Love" 3 years later. The album showcases their gritty, r&b live act but also exposes the "poppy" direction manager Don Arden was pushing them into with Kenny Lynch penned numbers like "You Better Believe It" and "Sorry She's Mine" (both of which lose the intended saccharine edge thanks to Marriott's incredibly soulful voice). The album cover photo by David Wedgbury is one of the most iconic snaps of the 60's with the band looking sharp as hell in their mod togs and perfect hair.  Mac told me they were all stoned out of their minds when it was taken and pointed out the spliff they'd drawn on the children's chalk (illustrating the point by writing "spliff" in Sharpie when he autographed my copy). Incidentally I bought my copy in the late 90's from a Small Faces fan who ran a record shop in Northfield, Minnesota who had acquired his copy via special order in the 60's. Unlike him I don't foresee myself selling this, ever.
By William - January 21, 2016

Super stuff. Georgie's Sweet Things very nearly made my list - was another purloined from the folks.