I never thought I'd need so many people....David Bowie R.I.P.

The death of Ian "Mac" McLagan at the end of 2014 was like a gut punch.  I'd met him, drank with him, laughed and chatted with him numerous times and even named a child after him and it was like losing a friend.  I never met David Bowie, I never shared a pint with him or talked about his shoes in 1966 nor did he ever know my daughter's name or inquire of her welfare. But somehow that doesn't make it any easier to accept his unexpected passing. My two "brushes" with David Bowie were from thousands of feet away.  In 1999 I purchased the 1966 Pye singles box set "I Dig Everything" at Rockit Scientist in NYC and walked down to French Roast on 6th Avenue with it in hand afterwards for a croque monsieur and citron presse and upon seeing the box set in my hand both the host and waitress pointed out to me that I'd missed the man himself by ten minutes (upon hearing this from the host I actually popped out the door and looked up both ends of 6th Avenue to see if I could spot a 5 11" Englishman sauntering coolly down the Avenue, no luck). Apparently he was a regular there.  Previously I was at his 50th birthday gig at Madison Square Garden on January 9, 1997 where an assortment of jack asses from crap bands joined him onstage after he played tunes from the newly released "Earthling". I spent most of the night cringing (especially when Lou Reed got lost during "White Light White Heat" as David tried in vain to show him the chords as Lou stood staring at his music stand) but it was all worth it when he took the stage for the final number with an acoustic 12 string and said "This is where it all began, I don't know where it's going to end" and proceeded to play a mind blowing "Space Oddity". Despite having to endure crap like Billy Corrigan or Frank Black I was blown away about how "on" Bowie was the entire time.  Either he really enjoyed being onstage and was high on the atmosphere or he was such a consummate professional that he was able to convince us all he was having a blast and went backstage and took off his party mask.  His voice was in top shape and he bounced around the stage like a ballet dancer doing kung fu. It just struck me today while writing this that he was the same age then as I am now. And now, 19 years later he's gone.

David Bowie first came into my life in the early 1970's.  My family had moved into a house in 1971 or 1972 and there was a teenage girl named Peggy who lived next door who bonded with my mom.  Her parents looked like they were from the 1950's and acted like it too.  Clearly they weren't hip nor were they the least bit interested in what Peggy listened to.  My mom, though hardly hip was at least still in her 20's and owned a large RCA  stereo in a wood cabinet that looked like a piece of furniture that she liked to play VERY loud (even if it was The Bee Gees or Neil Diamond).  Peggy would frequently bring albums over and my mom would let her play them.  My first glimpse of David Bowie was an LP cover with a scary looking orange haired guy in what looked like pajamas standing in an alley. I had honestly forgotten what "Ziggy Stardust" sounded like and actually remembered more about  the tracks on Alice Cooper's "Schools Out" album, T Rex's "Electric Warrior" and Don McLean's "American Pie" LP (Peggy's other frequent choices ). It was not until the the late 70's that I heard "Space Oddity" on a rock n roll radio station I listened to called WPIX (before I discovered college radio) that David Bowie was brought back into my axis.  I still had not connected him with the "Ziggy.." album until the same station played "Hang Onto Yourself" and I remembered how I knew the song and the DJ discussed the whole era at length.  My best friend dutifully loaned me a grubby original cassette of "Ziggy..." that an uncle passed onto him and it began. My parent's (my mom was always finely attuned to my musical tastes at Xmas as a kid) bought me "Changesbowie" for Xmas and it was all over from there.

New Wave/punk and to a greater extent "mod" entered my universe in late 1979 and by 1980 David Bowie was among the four contemporary albums that blew my mind (and quite possibly the first and last time such a large volume of current releases assaulted my senses) with his "Scary Monsters (And Super Creeps)" safely nestled along with The Jam's "Sound Affects", XTC's "Black Sea" and The Teardrop Explode's "Kilimanjaro". Little did I know it was the last Bowie album I would enjoy in it's entirety. 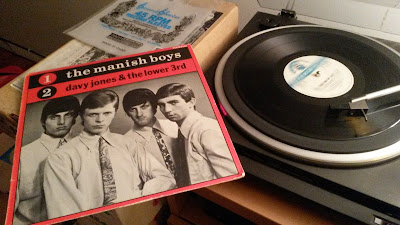 By 1982 mod had firmly redirected me back to my life long interest in British 60's music with The Who, The Small Faces and "Pebbles Volume Six: The Roots of Mod". Sometime in late 1982 or early 1983 I went round my friend Steve's house and he told me he had something for me to listen to. He sat me down and played me something on massive volume that resembled  The Who called "Baby Loves That Way" and announced it was a 60's David Bowie record and showed me a 10" EP sleeve with a shot of Davy Jones and The Lower Third looking mod as hell on the cover . I tracked that down post haste. The next two years were spent obtaining every track released by Bowie in the 60's on a variety of compilations/collections. Interestingly enough my first exposure to a 60's mod Bowie track came in the form of the '79 mod band The Purple Hearts who covered "I Can't Help Thinking About Me" on their album "Beat That" in 1980.

Bowie gave me a wealth of rich music to dabble in and it is varied so it was never boring as if every period was a different artist and each new rediscovery is always a pleasure. We parted ways musically after "Scary Monsters" and there were a few tracks here and there that I liked but it never troubled me that I couldn't get down with his trip-hop, indie rock et al stuff or whatever trend he was prefacing or riding. None of these mattered as I still had my fave '65-'67 period , the first Deram LP (which fights a daily war in my brain with The Small Face's first Immediate platter for "The Favorite Album of All Time" mantle), the "Berlin period" (my second fave era after the 60's), Ziggy, the coke hoovering Philly soul period (which I have, in the last year, come to appreciate), the curly haired folkie and the guy in a dress playing mind numbing heavy rock. I find almost ironic that this Thursday will be the 50th anniversary of his first single as "David Bowie".  Happy 50th anniversary David Robert Jones as "David Bowie" wherever you may be.  God speed spaceman.

"So I cried for all the others till the day was nearly through for a realized that God's a young man too..."
By William - January 12, 2016

Sadly never saw David (though I did see the Purple Hearts doing 'Can't help thinking...'), but it doesn't matter - the point is that he was there at all and its a lesser place without him. I doubt I'll be saying that about the Purple Hearts..