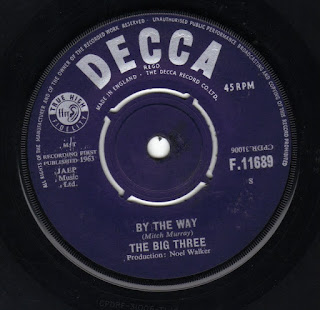 Liverpool had one of the largest beat group scenes in Britain and nearly all of them made at least one record in the wake of Beatlemania which saw A&R men swoop up there with contracts in hand.  Still smarting from rejecting The Beatles Decca records surprisingly signed few Merseybeat acts to their roster, among them were The Mojos, The Pete Best Four, The Dennisons and a band some of have called "The first power trio": The Big Three. Headed by the enigmatic vocalist/drummer John Hutchinson (aka "Johnny Hutch" to all on Merseyside) they featured Brian Griffiths (vocals/guitar) and future Merseybeat/Roxy Music vocalist/bassist John Gustafson (aka "Johnny Gus"). There were multiple line-ups but it's this configuration that many, myself included, consider the "classic" Big Three line up. Like many 60's Scouse beat acts the band were initially handled by Brian Epstein, who secured them a recording contract. The band released their first 45 on Decca in March '63 with a version of the "Louie Louie" of Liverpool, Richie Barrett's "Some Other Guy" (Decca F 11614) which reached #37 on the UK charts. 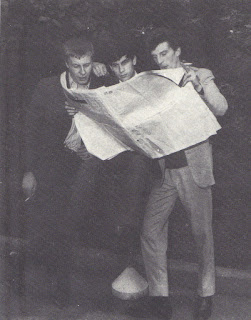 For a follow up release the band had a Mitch Murray track "By The Way" foist on them (beat scholars will recall The Beatles being also saddled with a dreadful Murray composition called "How Do You Do It", which they rejected and became a hit for the more compliant fellow Liverpudlians Gerry and the Pacemakers). The band were not at all happy with the release. Interestingly after this release in June 1963 the band parted ways with Epstein. Legends abound about their unruly behavior leading to Epstein terminating their contract  though another version was, understandably, that Epstein clearly had too much on his plate handling the Beatles, Gerry & The Pacemakers, Cilla Black, Billy J. Kramer and the Dakotas and others!

"By The Way" , like "How Do You Do It" is a sappy, uninteresting, pop ditty. The band do their best but it's not a terribly interesting composition. It's not dreadful, but it's not not something you want to play repeatedly. The number is redeemable only by Griffith's nifty guitar playing and Gustafson's backing vocals (an asset he would take with him to The Merseybeats) . The real gold is the flip side, "Cavern Stomp", a group original (which somehow the producer Noel Walker wound up sharing credits on). It's a rollicking, catchy beat group number that jives with amphetamine energy . Built around an infectious riff and lyrics that are possibly the only track of the Merseybeat era to name check the "movements" home base venue it's incredibly brief (1:41) but incredible. "Keep your jive and your rock n roll, do the Cavern stomp..."

In 1982 Edsel records would compile the band's slim discography as an LP "Cavern Stomp", which contains both tracks. A CD release in 2009 was put out by RPM titled "Cavern Stomp: The Complete Recordings" collecting all of their tracks and the Edsel LP was semi-legitimately issued on CD in 2004 by Deram in Germany as part of their "Liverpool Connection" series.

Here's an excellent feature on the band from someone who witnessed them back in the day: