British harmony trio The Ivy League's second US 7" release was their 4th British single "Tossing & Turning" (UK Piccadilly 7N 35251 June 1965). It was issued here in the States in September of '65 and was the only Ivy League US 45 released with a picture sleeve!

Starting off with some organ and very jangly guitars giving it a distinct "folk rock" feel "Tossing & Turning" again benefits from their stellar, crisp harmonies these guys were known for. The musical backing is quite solid too (the drums in particular, probably Clem Cattini) and no doubt makes the track. 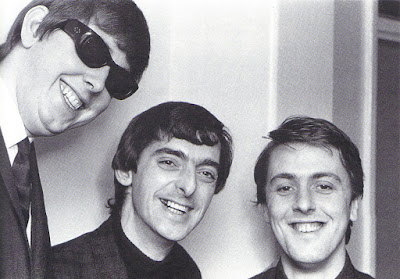 And then there's the flip side.....Despite starting out with some tough musical backing "Graduation Day" is a god awful song. Total pop drivel, like something written on the spot to hurriedly complete the session. More's the pity because the musical backing is great and the guitar solo is totally raunchy and over the top.

Both sides are available on a variety of Ivy League compilation CD's. As their material is owned by Castle Communications they've been licensed to death.