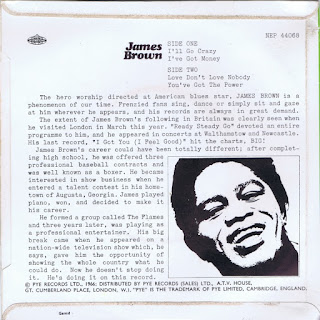 James Brown was probably one the the most oft covered 60's soul artists in the U.K. I mean think about it, Motown was huge in the UK but can you narrow it down by artist when it comes to who was covered the most?  Nah, J.B. nails it every time, I had six different versions of "I'll Go Crazy" to choose from for Pete's sake!  With that in mind I thought it would be neat to dig up 10 U.K. 60's J.B. covers and give you a bit about each of them, in no particular order. 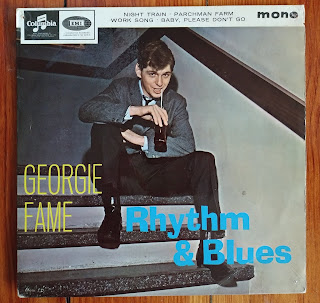 1. GEORGE FAME AND THE BLUE FLAMES-"The Night Train" UK E.P. track "Rhythm And Blues At The Flamingo" Columbia SEG 8382 1964
Kicking off both the live E.P. and live LP of the same title starting with an introduction by manager Rik Gunnell, Georgie Fame and Co.'s storming version of "Night Train" oozes mid 60's mod/r&b Soho cool. Punctuated by enthusiastic yelps by U.S. servicemen in the crowd (who were, for a time, Flamingo regulars) this version has an almost jazzy swing to it thanks the The Blue Flames stellar horn section and Fame's Hammond even if it sounds like the microphones were in the tube station down the street.

2. THE UNDERTAKERS-"Think" UK 45 Pye 7N 15690 1964
Issued on the flip of their 4th and final UK 45, a version of The Drifters "If You Don't Come Back", Jackie Lomax and his merry band of Scousers  turn "Think" into a totally British r&b affair removing any misconceptions that The Undertakers were just another beat group. This is thanks in no small part to sax player Brian Jone's (not the Rolling Stones guy) wailing and the band's snappy presentation that easily fits alongside any hip "mod" London r&b band.

3. THE UNTAMED-"I'll Go Crazy" UK 45 Stateside SS 431 1965
UK 60's r&b act the Untamed made six singles on four different labels in Britain with more line up changes than Spinal Tap had drummers.  Lead by constant lead singer/guitarist Lindsay Muir they were produced by their faithful patron Shel Talmy. Their version of "I'll Go Crazy" came out the same month as the Moody Blues version on their debut LP (see below) and is interesting in that it's probably one of the more poppy versions of a J.B. tune on this list.  Muir's voice is not suited for James Brown aping so he's restrained and the faint combo organ and the gritty/bluesy guitar solo gives it a feel like something the '64-'65 Alan Price era Animals would have done or my fave obscure beat group The Zephyrs. 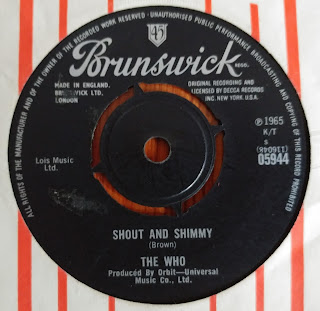 4. THE WHO-"Shout And Shimmy" UK 45 B-side Brunswick 05944 1965
No one in the British Isles were bigger proponents of the music of James Brown than The Who. Their first J.B. cover was this reading of "Shout And Shimmy" issued on the flip side of their third UK 45 "My Generation". They would later include versions of his "Please Please Please" and "I Don't Mind" on their debut LP "My Generation" and cover "Just You And Me Darling" on a 1965 BBC session. "Shout And Shimmy" has an almost frat rock feel to it from it's sophomoric party atmosphere thanks to Pete Townshend and John Entwistle's white boy falsetto backing vocals, not to mention Keith Moon's slapdash drumming.  Roger Daltrey's lead vocals are incredibly soulful and he's clearly the one carrying the water on this tune.

5. THE BO STREET RUNNERS-"And I Do Just What I Want" UK 45 Columbia DB 7488 1964
The Bo Street Runners were such J.B. fans that they cut "Tell Me What You're Gonna Do" backed by this stab at "And I Do Just What I Want" on the B-side. From the gritty volume pedal guitar licks, swatches of sax and groovy combo organ and John Dominic's punky lead vocals it's a worthy addition to our list here. R&b with attitude!

6. THE BLUE ACES-"Tell Me What You're Gonna Do" UK 45 Columbia DB 7755 1966
Reputedly a showband originally, The Blue Aces are known for their soulful 1966 mod freakout "That's All Right". They cut this J.B. tune on the flip of their previous single "All I Want". The lead vocalist has a jazzy style that reminds me of The Peddlers singer Roy Phillips while the horn work sticks to the original as does most of the arrangement but it's still halfway decent, though no where near as good as The Bo Street Runners version.

7. THEM-"Out Of Sight" UK LP track "Them Again" Decca LK  4751 1966
Though technically from Northern Ireland Them WERE based and recorded in the U.K. so....
"Out Of Sight" is a fish out of water on the mixed bag that is "Them Again", their second and final long player cobbled together with material cut from no less than at least four different line ups!! Its also interestingly one of the few Them cuts with horns, but it works even though at times it sounds somewhat ham fisted and Van Morrison isn't exactly the world's greatest soul singer.

8. GEORGIE FAME-"Papa's Got A Brand New Bag" UK LP track "Sound Venture" Columbia SX 6076 1966
Cut for Georgie's predominantly jazz LP (and final album of his Columbia period) with The Harry South Big Band "Sound Venture", the inclusion of "Papa's Got A Brand New Bag" on the long player is quite a square peg in a round hole and allegedly Georgie had to lobby hard for it's inclusion.  The horns add an interesting big band feel which actually really works making it an interesting interpretation. 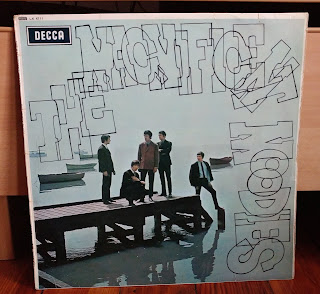 9. THE MOODY BLUES-"I Don't Mind" UK LP track "The Magnificent Moodies" Decca LK 4711 1965
"I Don't Mind" was covered by The Who on their debut LP but The Moodies beat them to it on theirs by five scant months. Theirs is a somber affair with lead vocals not by lead singer Denny Laine but by keyboardist Mike Pinder and it's his jazzy ivory tinkling and Laine's twangy guitar that make the number different from The Who's and the mediocre version by The In Crowd.

10. ALEXIS KORNER'S BLUES INCORPORATED-"Please Please Please" UK 45 B-side Parlophone R 5206 1964
One of the more interesting James Brown reading's is this flip side by the grandaddy of British r&b Alexis Korner. The brilliant jazzy horns/guitar interplay give it a slightly blues feel to it that totally takes it into new territory as far as James Brown covers are concerned. Stellar!

Germans of course, but the Rattles did the best version of "I'll Go Crazy" in my opinion, and Sheffield's great Frank White always did a storming version of it live.

Re.Them: Northern Ireland is part of the United Kingdom.