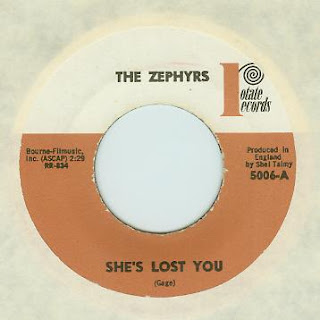 The Zephyrs would've been a nondescript British 60's beat group had it not been for their last two brilliant 1965 singles produced by Shel Talmy. For once I can actually tell you something about a band. They had four singles prior to this release and unlike many "beat" groups from this era were from London not Liverpool, Manchester or Birmingham (this was their fifth, the next and final one "I Just Can't Take It/"She Laughed" Columbia DB7511 is worth seeking out as well). The members were John "Chippy" Carpenter-drums/lead vocals, John Peeby-guitar, John Hinde-bass and Mick Lease-organ. "She's Lost You"/"There's Something About You" was their fifth single, which as Columbia DB7481 in the U.K. scraped up to #48 on the pop charts. Fortunately it was also released here in the States on the obscure Rotate label . One always questions the motive of weird little American labels who put out singles by English bands nobody ever heard of in their home country, but thankfully for us anoraks they did!!


"She's Lost You" is a typical bluesy type British beat number, too poppy to be Them but gritty enough to not be mistaken for The Searchers. The key to it is it's combo organ driven riff and laid back vocals. On the flip side is the ever catchy "There's Something About You". I'll always be indebted to my pal Keith Patterson for turning me onto this number. Manic drumming, a happy-go-lucky feel and some syrupy backing vocals swing along with the nifty little guitar/organ riff that eventually peels into a pretty wiggy little organ solo . It reminds me The Zombies, musically, at their most manic/uptempo and The Applejacks on one of their handful of decent records.

"She's Lost You" was contained on the CD comp "That Driving Beat:UK 60's Freakbeat Rarities Volume Two" and has recently also popped up on the deluxe box set that compiles volume's one through five of the series. "There's Something About You" has sadly proved illusive on the reissue front , though with six singles under their belt you'd figure the world is ready for a Zephyrs CD compilation?! Luckily there's a lovely clip Miss Claudia Elliott located on YouTube of it listed below! I do find it amusing that an un-mod group like The Zephyrs are seen playing at a 60's mod bastion like The Scene, I wonder how much they paid the punters to pretend they liked them or did they drag in fake ones for the filming?

"There's Something About You" from the film "Primitive London":

I'd really like to get in contact with 'Chippy' regarding some songs he recorded writen by Rick Minas. If you can help please email me: m@courtman.co.uk

Can't help you there friend, I'm just a fan!

Mike has a lot of inside info and is glad to talk about the band.

I actually own their other US Rotate 45, and blogged about it:

Love your blog, I'd like to link to it and would appreciate you linking to mine, thanks!