My introduction to the two tracks on this 45 came via a 1965 cheesy US MGM records album compilation titled "Micky Most Presents British A Go-Go" (issued again a year later as "Micky Most Presents British In Groups"), a shoddy attempt at throwing a few hits he produced by The Animals and Herman's Hermits on an LP with a host of obscure productions by the likes of The Cherokees, The Symbols and these two cuts by The Moquettes (previously issued as a 7" in the UK as Columbia DB 7315 in 1964).  Sadly I can't tell you a thing about them other than that the two tracks on this 45 represent their sole musical output and that they were from Reading.

"Right String Baby But The Wrong Yo-Yo" dates back to the 1930's, but Carl Perkin's 1958 reading was no doubt the source for this cover. Delivered at an insane tempo with organ and wailing harmonica it's a brilliant interpretation  and a perfect encapsulation of gritty 1964 British r&b. 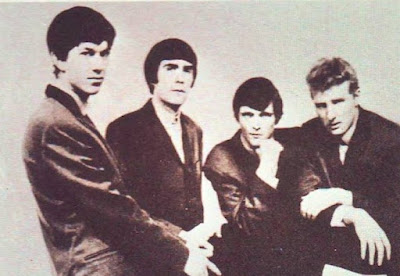 The b-side, "You Came Along", is a brilliant combination of r&b meshing with beat music that falls somewhere between The Zephyrs and The Animals. As on the A-side the combo organ really makes the number.

Hear "You Came Along":