Manfred Mann's Mk. II (I call them Mk. II as they included new vocalist Mike D'Adbo, father of the lovely Olivia, as their lead vocalist) second US release was an interesting combination. Released in October 1966 it featured "Each And Every Day", a Mike Hugg original that would later become a May 1967 U.K. hit for Simon Dupree and the Big Sound as "Day Time Night Time" (curiously the Simon Dupree cut would not get a US release until July 1968!) as the A-side. This track was not released in the UK by Manfred Mann and got it's first airing here (and subsequently as an E.P. track in France and Portugal). Even more curious was the flip side, "Semi Detached Suburban Mr. James" which was released at the same time as an A-side in the UK! It was later issued as a double sided promo only 45 here in April '67. Adding further interest the track was later issued in the US only two months later by a British band Herbie's People who recorded it with it's original intended title "Semi Detached Suburban Mr. Jones" (changed to "James" by the Manfreds to avoid any drama as the Manfred's had recently lost Paul Jones as their lead singer)!!

"Each And Every Day" does not harness the power and upbeat chirpy feel as Simon Dupree and Co's cover but it still works.  Delivered much slower and with a more sparse musical backing it's selling point is Mike D'Abo's blue eyed soul vocals (and it's driving ivory tinkling by Manfred) and of course a Mellotron coming in and making it slightly off kilter playing the bits that were later done by a French horn in the Simon Dupree version. 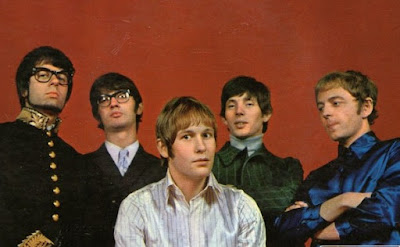 And speaking of Mellotron, there's the flip, "Semi Detached Suburban Mr. James" which is probably the first British top ten hit to kick off with a Mellotron in it's opening notes! From the pen of Geoff Stevens and John Carter it's a pop classic about sour grapes as the protagonist cynically wishes his lost love good luck with her new life with a cheeky gallows humor infectious chorus of "so you finally named the day" that slightly resembles a good time knees up at the boozer.

Both sides are contained on the excellent US CD compilation "Chapter Two: Best Of The Fontana Years" and on the CD reissue of the LP "Mighty Garvey!" which is still in print.

Hear "Each And Every Day":

I always thought that both versions of Manfred Mann were very underrated. I do like both sides of this 45 very much. In fact, I could see Phil Collins do a cover version of "Each and Every Day"