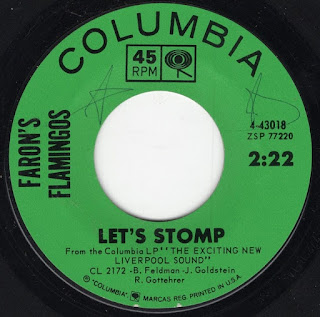 With the advert of Beatlemania in the United States, strangely unlike their British counterparts, American record labels were slow to plumb Liverpool for other acts preferring to stick to the hit makers. Interestingly Columbia records launched a compilation album in March of 1964 titled "The Exciting New Liverpool Sound". It comprised of 12 tracks culled from two long players previously issued in the U.K. on the Oriole label over the span of two records called "This Is Merseybeat". This single was comprised of two tunes found on the Us Columbia album, even more interesting was the fact that the single featured two different artists, Faron's Flamingos and Rory Storm and the Hurricanes  (previous home of one Ringo Starr before joining The Beatles).

"Let's Stomp" was originally cut by Bobby Comstock in the US on the Lawn label and released in December 1962, it's U.K. counterpart saw a release in March of 1963 on the Stateside label (SS 163).  Kicking off with a drum beat later reused by the Sweet on their hit "Ballroom Blitz" Faron's remake is slightly more uptempo and almost frantic anticipating the trash beat sound of The Milkshakes and therefore to my ears more interesting. The production is terribly thin but there's something charming about it, especially when compared to all of the polished Merseybeat being produced by George Martin. It starts out with a spoken word intro by Bill Harry, editor of the famous Liverpool music newspaper "Merseybeat".

Bo Diddley's "I Can Tell" was the flip side of his July 1962 Checker 45 "You Can't Judge A Book By The Cover", it was later released in Britain in October on the Pye International label (7N 25165). Rory Storm's version first graced the "This Is Merseybeat Volume One" album and though it's not a patch on the original of course it still rocks. Like the A-side it has a certain charm in it's trashy delivery coming across like a boozy frat rock band, especially the choppy guitar strumming care of Johnny Byrne aka "Johnny Guitar" and the slapdash drumming by Ringo's replacement. If anyone can confirm who it is I'd love to know was it Gibson Kemp, future Artwood Keef Hartley or future Peddler Trevor Morais?(the later was also in Faron's Flamingos!). Rory croons along in an almost disinterested tone like he had somewhere else he'd rather be.

Both sides appeared on an Edsel records CD that collected tracks from both "This Is Merseybeat" albums.