The Pretty Things had a small run of US singles, six of their nine UK Fontana singles were issued here on the US imprint of the label. Their last was June 1966's "Come See Me" (Fontana F-1550) followed by a two year dry spell before the release of today's subject in July of 1968. It was previously issued in the UK as Columbia DB 8353 in February of 1968 and would only be a one off release for the US Laurie label (home of lots of other off the wall UK releases like Adam Faith's "Cowman Milk Your Cow") before a brief move to Motown's rock n roll Rare Earth spin off for one single and then semi stardom on Led Zep's Swan Song label.

Most 60's British r&b bands fell like Dracula to garlic and a sharpened stake to psychedelia. But like The Stones The Pretty Things weathered the storm easing from r&b into psych (via what I like to call their "mod" period in '65-'66) before getting freaky (much like The Stones and The Yardbirds). To me some of The Stones attempts at psychedelia were sometimes embarrassing with poor track selection (half of "Their Satanic Majesties Request" for instance) and awful production and the Yardbirds to my ears were just bluesmen on acid while Pagey was ripping off Davy Graham and Bert Jansch. But the Pretty Things had a great track selection of originals in their psychedelic period and a great producer in Norman Smith (also responsible for the first Pink Floyd album and two of their three Syd Barrett era 45's and their two post Syd ones) that made them rise to the top of the lot and it all magically happened in just one year.

The coupling of "Talkin' About The Good Times" b/w "Walking through My Dreams" picks up where November '67's "Defecting Grey"/ "Mr. Evasion" 45 (U.K. Columbia DB 8300) left off as far as psychedelia is concerned. The credit for shaping the Pretties psychedelic sound to my ears is owed in no small part to former Fenmen members Jon Povey (keyboards) and Wally Waller (bass) and their backing vocals (and their writing assistance to lead singer Phil May and guitarist Dick Taylor). The Pretties also get high marks for this period for using the Mellotron and much like The Zombie's "Oddysey And Oracle" it's used sparingly and tastefully. 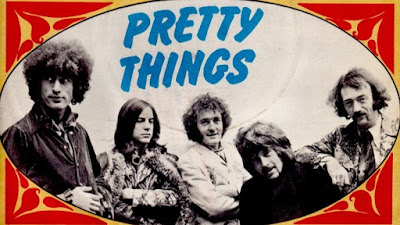 "Talkin' About The Good Times" is in my estimation the most psychedelic record The Pretties ever cut. I'd prefer to skip any Pink Floyd comparisons that are often thrown about by people on this era that I think is purely based on sharing the same producer/label. It's clockwork guitar/balalaika/sitar intro reminds me of something off of the Tomorrow LP and it's immediately meshed with loads of Mellotron and the band's layers of harmonies (dig the Beach Boys style a capella bit towards the end) and then it fades out with a hypnotic riff from Dick Taylor (and more Mellotron).

"Waking Through My Dreams" is less trippy with subtle organ/piano beneath the bands incredible harmonies, with guitars playing descending licks and crashing drums from Skip Allen (who would depart soon after to be replaced by former Tomorrow drummer John "Twink" Alder). The fade out once again showcases the perfect meshing of their vocal abilities and hypnotic riffs beneath a layered tapestry of sound.

Both cuts are featured on several Pretty Things collections, the most current being "Come Seee:The Very Best of The Pretty Things". "Talkin' About The Good Times" cropped up on Bam Caruso's "Rubble 3: Nightmares In Wonderland" collection while "Walking Through My Dreams" was issued on the "Nuggets II" box set, "Psychedelia At Abbey Road" and  the "Rubble 2: Pop Sike Dreams" compilations.

Hear "Talkin' About The Good Times":