Here's ten more US 60's 45's from the archives for your listening pleasure! Maybe some new ones.. 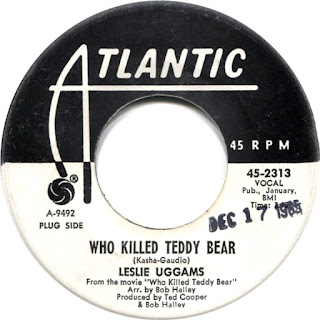 1. LESLIE UGGAMS-"Who Killed Teddy Bear" US Atlantic 45-2313 1965
From the film of the same name Leslie croons this killer track that would not have sounded at all out of place in "Little" Anthony and The Imperials repertoire! Made nearly impossible to find due to it's Clint Ballard penned flip "Don't You Even Care" (also covered by The Hollies), a massive Northern favorite, "Who Killed Teddy Bear" is a moody orchestrated stormer worth checking out as is the flick starring Sal Mineo as a creepy Times Square cruiser with serious sexual hangups and Juliet Prose as a mod looking club DJ he's stalking.

This curiously named artist is responsible for one of the most collectible and expensive Chess 45's you're ever likely to encounter. Backed by some jazzy/snazzy uptown horn sounds and some groovy ivory tinkling this one oozes sophistication that betrays it's 1967 release date. 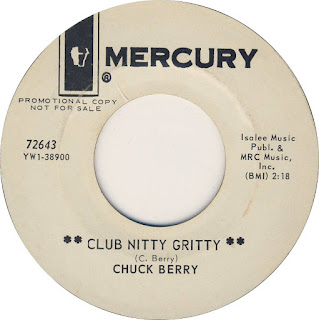 3. CHUCK BERRY-"Club Nitty Gritty" US Mercury 72643 1966
By 1966 you'd have thought Chuck was all out of tricks but this funky 1966 single shows the old dog still had new tricks.  Moved along by some jazzy electric piano and Chuck's requisite licks it's a rocking tune and a pricey one at that!

4. BOBBY PETERSON QUINTET-"Mamma Get Your Hammer" US V-Tone 221 1961
This sax driven screamer sounds like a cross between Richard Berry and early Robert Parker with the most insane chorus you'll ever find in an r&b number: "mama get your hammer a fly's on the baby's head..".

5. THE FIVE Du-Tones-"The Gouster" US One-derful 4818 1963
From the excellent One-derful label comes this nifty little number by The Du-Tones about a brief and little known American urban subculture known as "gousters".  A gouster (which depending on which interpretation you read) was allegedly a dandified street hoodlum in gangster style apparel. "The Gouster" is a frantic, boisterous and perfect melding of greasy/gritty r&b and street corner doo-wop from the band who had previously gave us "Shake A Tail Feather". David Bowie took note of the Gouster trend which you can read about here. 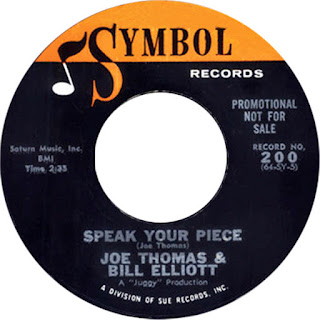 6. JOE THOMAS AND BILL ELLIOTT-"Speak Your Piece" US Symbol 45-200 1964
Flutist Joe Thomas and drummer Bill Elliott's mega obscure 45 for the Symbol label "Speak Your Piece" is an essay in "mod jazz" coolness. From it's groovy flute, honking sax and soulful vocal delivery (via Elliott) you're hooked, instantly, the first time you hear it.  The US 45 is topped by an even pricier French E.P. containing the track, but there's always their US 1964 Sue LP which is a bit more affordable.

7. SHAWN ELLIOTT-"The Joker" US Roulette R-4643 1965
American vocalist Shawn Elliott's take on the Anthony Newley/Leslie Bricusse number "The Joker" has unfortunately been roped into the dreadful Northern soul category, which is a shame because it's more of a jazzy pop song to my ears. It starts out slow but then the fuzz guitar and upbeat tempo increases with some jazzy flute and strings.  Pure magic!

8. ANTHONY & THE IMPERIALS-"You Only Live Twice" US Veep V-1269 1967
Forget the Nancy Sinatra version kids the real money is on this take by Anthony & The Imperials (formerly Little, I guess he was grown by '67).  This version followed Nancy's a month later and it's amazing, from the storming arrangement by Teddy Randazzo with shimmering strings (that could be off of something on Scott Walker's first solo LP!), horns and organ to the Anthony's excellent delivery it's a pity no one paid attention to it.

9. TERRY AND THE CHAIN REACTION-"Keep Your Cool" US United Artists UA50199 1967
Produced by Rick Hall (who co-wrote it as well) this laid back number has a feel and tempo that reminds me of Jimmy Hughe's "It Ain't What You Got" (also a Hall production). This band is a mystery to me as I know absolutely nothing about them.  Regardless it's a subtle almost spoken word number with advice to how to "keep cool" laid down on top of a menacing little soulful groove. 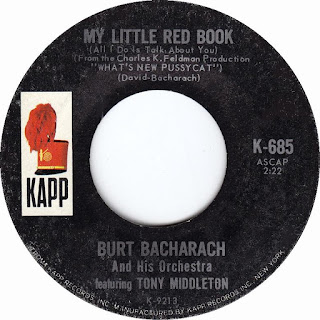 10. BURT BACHARACH AND HIS ORCHESTRA FEATURING TONY MIDDLETON- "My Little Red Book" US Kapp K 685 1965
Northern soul anoraks will of course be familiar with Mr Middleton's "To The Ends Of The Earth". Far less expensive but still not had cheaply had is this version he did with Burt Bacharach singing "My Little Red Book" from the film "What's New Pussycat". Middleton's phrasing at times sounds restrained but it's a killer track with the musical backing providing a template for the Sounds Incorporated version.