Aussies On US Labels: The Executives


Australian sextet The Executives can best be described as Down Under's answer to Britain's Episode Six on a good recording or a watered down Spanky & Our Gang on some of their less interesting material. Owing to their harmony/sunshine pop sound, the number of band personnel and the fact that one of them was a female vocalist Episode Six comparisons are somewhat warranted.

Our subject here was their only U.S. release issued in August of 1967. Back home in Australia it was their second single (issued as Festival FK-1776 in May of 1967).

The A-side "My Aim Is To Please You" is a mundane slice of Mamas and Papas meets The Seekers style pop pastiche. It's a cover of an earlier track (1966) by an American artist called Kenny Young oddly issued on United Artists as well. 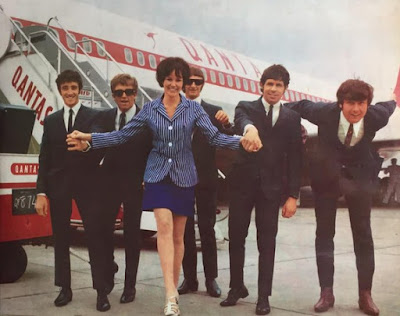 Interestingly the flip, "Bad Reputation" is also a U.S. cover from the United Artists label, originally released by The James Boys in 1966 (United Artists 4-43488). The Executives version is pretty much a note for note cover but it's quite an improvement on the original, which isn't sure if it wants to be The Righteous Brothers or soul music. The Executives however refine it's rough edges and turn it into a harmony pop masterpiece with some Mamas and Papas style harmonies and a groovy cheezy Farfisa.  The band went on to cut nine more singles, two E.P.'s and two LP's in Australia but further releases in the United States were not forthcoming.

Both sides have yet to surface on any legitimate compilations.

Hear "My Aim Is To Please You":