Britain's harmony pop quintet the Episode Six have often been relegated to a mere footnote in rock n' roll history thanks to their lead singer Ian Gillian and bassist Roger Glover leaving the band to replace Rod Evans and Nicky Simper in Deep Purple.  But the band was much more than a footnote.  With the sunshine harmony pop sound they cut an astounding ten singles in the UK between 1966 and 1969. Just four of them were released in America on four different labels no less! Today's specimen was their third US release being issued here in July 1967, it was previously issued in February in the UK as Pye 7N 17244.

"Love-Hate-Revenge" is a nifty little track with it's pseudo raga guitar riff, pulsating bass and kitschy descending harmony scales that evoke a Middle Eastern feel during it's middle eight. The lyrics concern a guy who acquires a doll that he can use for voodoo against a lover who jilted him with a chorus that goes "If I want you to cry bet your life you're gonna cry when I put two drops of water in this little doll's eyes, so if I wanna get even for what you did to me all I gotta do is break it's heart and you'll feel misery". The US pressing is interesting because during the middle eight after the previously mentioned descending harmonies instead of the punctuating Cossack sounding cries of "Hey!" there's weird electronic feed backing bleeps and blips. It was originally cut by the Del Satin's whose original release preceded the UK Episode Six cover by a month. 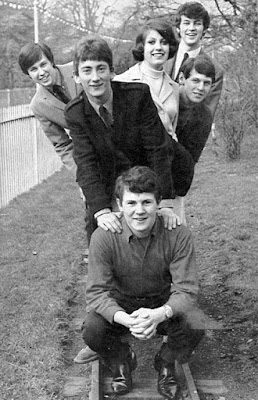 The flip, "Baby Baby" is a cover of the soul/r&b Anna King and Bobby Byrd James Brown produced track originally released here on Smash in 1964. It's a duet between keyboardist Shelia Carter and presumably Ian Gillian that's actually surprisingly halfway decent thanks to their top notch vocal skills and funky instrumental backing as the band had a dual career of a Brian Auger/Julie Driscoll type act in addition to being purveyors of sunshine harmony pop.

Both tracks were issued on a host of Episode Six CD compilations over the years, all of which are now out of print and extremely expensive!

Hear the US version of "Love Hate Revenge":