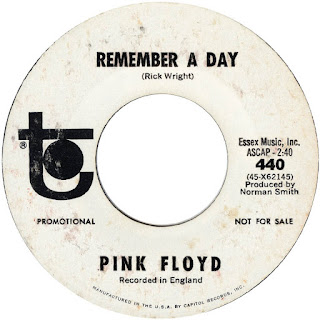 1. PINK FLOYD-"Remember A Day" Tower 440 1968
One of the handful of Syd Barrett tracks on the Floyd's second long player was this Rick Wright composed/sung number punctuated by eerie slide guitar and controlled feedback by Barrett, the band's doomed and soon to be sacked leader. A positively odd choice as a single, it was only released here in the States and in Japan as the flip of "Let There Be More Light" making it highly sought after. The single edit fades out after Syd's first slide solo.
https://youtu.be/Mv6LsZNdet4 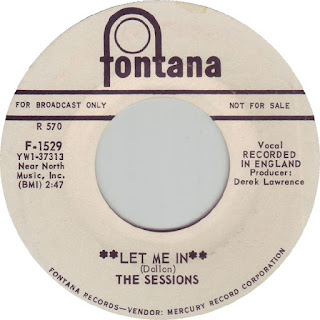 2. THE SESSIONS-"Let Me In" Fontana F-1529 1965
This Miki Dallon penned track was first cut by The Sorrows on their 1965 UK LP "Take A Heart". The Session's version is almost tripled in speed  and far more rocked out, though not as vocally strong as the original it's a perfect frantic little beat number.
https://youtu.be/3flk7tJAWuE 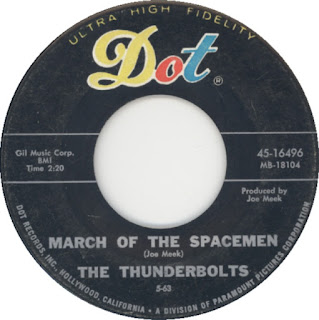 3. THE THUNDERBOLTS-"March Of The Spacemen" Dot 45-16496 1963
Curiously this Joe Meek penned/produced 45 was only released in the United States. It's fairly mundane and could easily be confused for one of the Tornados mediocre "space" instrumentals that Meek seemed to churn out conveyor belt style, perhaps it was released here to avoid stealing thunder from The Tornados? Next.
https://youtu.be/SL0rCt8EpeI 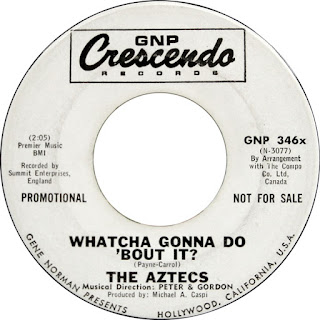 4. THE AZTECS-"Whatcha Gonna Do Bout It?" US GNP Crescendo GNP 346x 1965
Under the musical direction of Peter & Gordon  this cover of the Doris Troy classic has a very light/laid back feel to it, oddly not at all dissimilar to P&G's later reading (though not as tough as theirs musically) and not as spirited as The Hollie's rendition it's still worth a listen.
https://youtu.be/QsSfvtfju-I 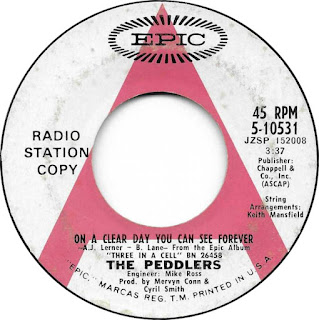 5. THE PEDDLERS-"On A Clear Day You Can See Forever" Epic 5-10531 1969
It's positively criminal that this smooth/super club jazz interpretation of "On A Clear Day You Can See Forever" was only released as a single in the US because it's positively the strongest track in their catalog. It's lush jazz trio with Hammond and strings bests even Georgie Fame in his "Fame In '67" CBS period. It was later used to amazing effect in a sequence in the TV show "Breaking Bad".
https://youtu.be/yxf1IFgPH5s 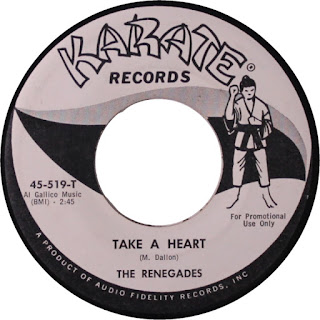 6. THE RENEGADES-"Take A Heart" Karate 45-519 1965
This Finnish (and later Italian) based Brit beat quartet cut the Sorrows hit for a US only release (one of their two 60's releases here). As with The Sessions above, it's for more raw than the original and what's nice about it is it's a completely different arrangement than the original so high marks for that!
https://youtu.be/KaR78kubB_w 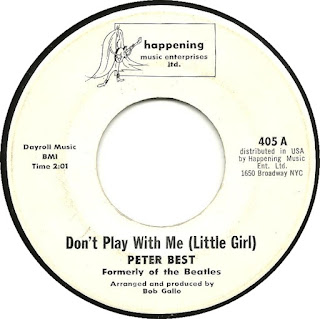 7. PETER BEST-"Don't Play With Me Little Girl" Happening 505 1965
Poor ex-Beatle Pete Best only had one single released in the U.K. but here in the States it was open season with six different 45's released on just under a year's time! "Don't Play With Me Little Girl" was the first, produced and arranged by Bob Gallo. It's incredibly soulful, though strangely there are no song writing credits and sadly it's NOT on YouTube! 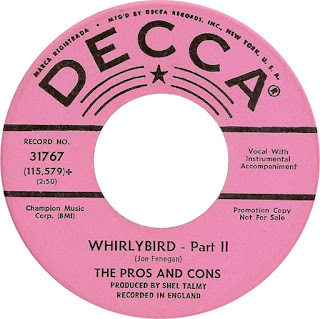 8. THE PROS AND CONS-"Whirlybird" Decca 31767 1965
This Shel Talmy produced raver is a frantic little beat number with sax and a driving beat complete with a funky lead bass solo and a wailin' organ solo that's short on lyrics (just a guy improvising around "Doing the whirlybird"). Any ideas on who they were?  And because the party won't stop it's spread out of two sides!
https://youtu.be/sjEGnZQ4WGg 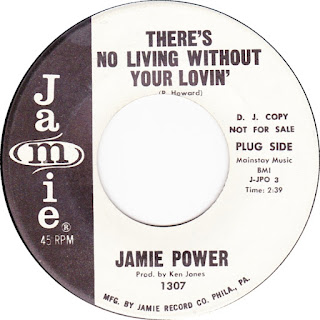 9. JAMIE POWER-"There's No Living Without Your Loving" Jamie 1037 1966
This was the third of Duffy's four American 60's singles, curiously this and it's predecessor "She Don't Know" were issued as "Jamie Power". "There's No Living Without Your Loving" was previously tackled the year before by Manfred Mann. Duffy's version has a folk rock feel to it, with it's "Needles And Pins" style jangly guitars but his vocals are still soulful on top of the heavily orchestrated production.
https://youtu.be/6bis8kWpd8s 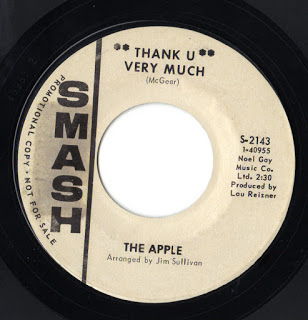 10  THE APPLE-"Thank U Very Much" Smash S-2143 1968
Released hot on the heels of the U.S. pressing of the original version of "Thank You Very Much" by The Scaffold (Bell 701 January 1968), Page One records pop psych darlings The Apple cut this disposable literally note for note/unimaginative cover version for the U.S. market. Neither version was noticed by the U.S. buying public though it additionally saw a release in the Netherlands.
https://youtu.be/7ujkcsl39wY
All scans courtesy of 45cat.com
By William - September 10, 2022