SIMON DUPREE AND THE BIG SOUND WITH JACQUI CHAN-Kites/Like The Sun, Like The Fire US Tower 377 1967
U.K. act Simon Dupree And The Big Sound had one of those double edged careers like the Small Faces where in the studio they got freaky but still kept the soul faith onstage where they were socking it to them with Ben E. King and Homer Bank's covers.
"Kites" was the band's fourth U.K. single (Parlophone R 5646 October 1967), it was issued the following month here where it was their second of three U.S. singles. Originally it was released by the MOR group The Rooftop Singers (September 1967), Simon Dupree and Co. took it to #8 in the U.K. guaranteeing them several appearances on "Top Of The Pops" (all footage of these airings of course no longer exists). The single failed to garner any commercial success in the U.S., both releases credited actress Jacqui Chan who spoke in Mandarin during several parts of the song.
"Kites" utilizes a gong, wind sound effects, Mellotron, vibes and piano with the hammers softened. Lead singer Derek Shulman confidently carries it (despite the fact that he and the band loathed the song and were forced to record it at their manager's behest) and his crooning works with the dream like feel of the track, perfectly weaved with the Mellotron. Jacqui Chan's Mandarin bits were a little more difficult as although she was of Chinese descent she was not familiar with the language having been born in Trinidad. The problem was solved by a local restaurateur who translated what was required of her and she took it home to rehearse with some coaching from her Chinese grandmother!! 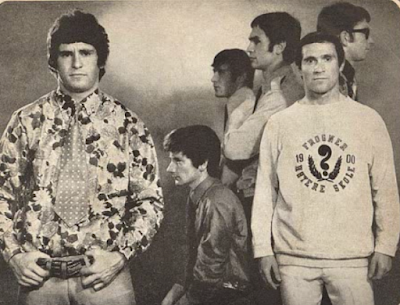 The flip, "Like The Sun, Like The Fire" has a similar crooner feel to (not necessarily in a derogatory way either) but with it's waltz 4/4 time that adds an almost fairground feel to it. The number is accompanied by strings and brass (that have an "Oompah band" feel to them) woodwinds with a clarinet solo.
Both sides were collected on the all inclusive/definitive Simon Dupree and the Big Sound collection "Part Of My Past".
Hear "Kites":
https://youtu.be/rQAm4wcK0vo
Hear "Like The Sun, Like The Fire":
https://youtu.be/F7yR22U6nGc
By William - November 15, 2021

Email ThisBlogThis!Share to TwitterShare to FacebookShare to Pinterest
Labels: Simon Dupree And The Big Sound

Love these U.K. obscurities on U.S. label posts. Thank you, you do excellent work.