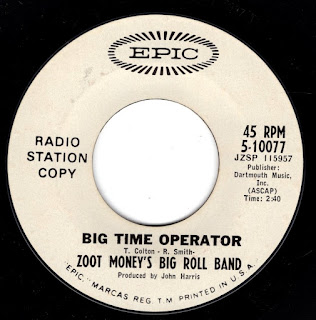 ZOOT MONEY'S BIG ROLL BAND-Big Time Operator/Zoot's Sermon US Epic 5-10077 1966
British 60's mod club/r&b legend Zoot Money left nary a trace of his prolific recording career in the United States. Epic released his live 1966 LP "Zoot!" here as "At Klook's Kleek" and just one single, today's subject (it was released in a picture sleeve no less!). But what a single it was!
"Big Time Operator" came via the pen of songwriters Tony Colton and Ray Smith (the former also had a recording career of his own). The pair penned a host of classic obscure titles, The Shotgun Express "I Could Feel The Whole World Turn Round", "I Stand Accused" (made famous by The Merseybeats AND Elvis Costello) to name but a few. It was covered in Australia by Jeff St. John and The Id and recorded but unreleased for many years in the States by Charlie Rich (during his Hi records period) and by Tommy James and The Shondells on their "It's Only Love" LP. But for me the definitive version will always be this classic interpretation by Zoot Money and the boys.
Maybe it's the strong horn section, maybe it's Zoot's laid back vocal style or maybe it's the catchy/rhyming lyrics that list the number of job's he's had:
"I started off a newsboy on a paper, for a time I worked an elevator, all the time I knew that later, I would be a higher rater, and finally a big time operator..."
But any or all of those make this one of my favorite mid 60's U.K. r&b tracks. The horns in the mid section just seal the deal, punchy and powerful.
The flip side is an instrumental, "Zoot's Sermon" composed by Zoot and future Police guitarist Andy Somers (nee Summers). It starts out like a mellow piano instrumental with bongos and hand claps that sounds like one of those studio only concoctions Chess/Cadet put out on a 45 in the mid 60's but then it fattens up when the horns and the cool Hammond B-3 blends it turning it into a full on party.
Both sides on on Repertoire's highly recommended and fully comprehensive CD compilation "Singles A's & B's" and the more recent Zoot Money's Big Roll Band box set "Big Time Operator".
Hear "Big Time Operator":
https://youtu.be/SxgVlcKgkCU
Hear "Zoot's Sermon":
https://youtu.be/y62Jcv15vf8
By William - November 23, 2021

Wow, I never knew Zoot Money had a 45 on Epic here in the States. I'll have to keep my eyes open for this one.

Wow, I never knew Zoot Money had a 45 on Epic here in the States. I'll have to keep my eyes open for this one.