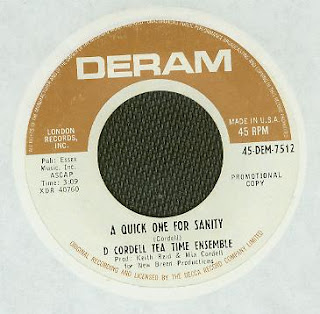 Most of you will be familiar with Denny Cordell as the producer behind The Moody Blues, Georgie Fame and The Move (as well as being responsible for helping a young Tony Visconti gain a foothold in the U.K.). What most of you may not know is that he cut half a single once. Well not really but...read on.

"A Quick One For Sanity" is actually one of those countless numbers of Graham Bond Organization tracks that laid (and in the case of others still do) unreleased. Essentially it's a version of a number called "It's Not Goodbye" cut in 1966 (which did not see a release until the "Solid Bond" compilation LP of 1970). This musical backing is different, but sessentially the same song, just another recording, possibly earlier? This is not the first, or the last time a Bond instrumental would be utilized by another artist. The Who's "Substitute" B-side "Waltz For A Pig" is the his work (with the G.B.O.), as is a track "Blew Through" on the 1970 Philamore Lincoln LP. Of course by this point the classic G.B.O. line-up of Jack Bruce(bass), Dick Heckstal Smith(sax) and Ginger Baker (drums) had ceased to be as Bruce moved (briefly) onto Manfred Mann and later joined Baker in Cream. It's driven by the characteristic Bond heavy Hammond sound and a jazzy solo by Smith. One wonders why Cordell threw together such an ensemble.

The otherside is the second Deram imprint by a young woman folk singer named Beverley(later Beverely Martyn after marrying the late folksinger John Martyn). She had the honor of being the first artist to release a record on Deram (DM 101, a Randy Newman track called "Happy New Year") in December 1966. It is said that she'd had some fleeting liaisons with Donovan before taking up with Paul Simon during his U.K. "hiatus" from Simon & Garfunkel that lasted a few months (whereupon he returned to the U.S. with a British accent...cringe!). This led to her appearance at the Monterrey Pop festival and her voice being heard on Simon & Garfunkel's "Fakin' It" (where she cheekily can be heard to say as a bell on a shop door rings "Good morning Mister Leitch have you had a busy day". Leitch being Donovan's surname). One ponders the state of things between her and Donno as she covers his "Museum" (from his U.S. only "Mellow Yellow" LP and also a U.S. only single by Herman's Hermits). The backing musical style is laid back with almost a trad jazz feel, a day late and a pound short or just in time to catch the brief U.K. "1920's craze"? I'm not sure, but it sure sounds "campy" to me. Beverely's voice is great as always, just out of place with the rag time backing which is rather sadly, lame.

"A Quick One For Sanity" did gain a reissue recently on of the "Instrumental Hipsters" CD compilations but the Beverely side has yet to surface. Maybe someday Decca will issue more Deram cuts on some fresh new CD compilations instead of force feeding us the same old Amen Comer and Small Faces cuts.

Hear "A Quick One For Sanity":

Email ThisBlogThis!Share to TwitterShare to FacebookShare to Pinterest
Labels: Deram

There is a superb album/master tape
killing time in a lock-up garare somewhere in London of Beverly Martyn... "Happy New Year", [a Randy Newman song], was taken from it to inaugurate Deram... The session line up was:- Jimmy Page, guitar, John Renbourn, guitar, John Paul Jones, bass, Nicky Hopkins, piano, Andy White, drums, myself [Mike Lease], Hammond C3 organ. If released "Pickin' Up THe Sunshine would have been a No. 1. - Mike Lease.

Beverley's "Museum" has been released on CD - Graham Bond, Singles & Rarities Vol 3, on Rock In Beat Records (RB 396), a German label, I think. I am currently listening to the album and thought I'd try to find out why "Museum" was on the album, along with 2 versions of "A quick one for sanity". Now I know. Thanks!