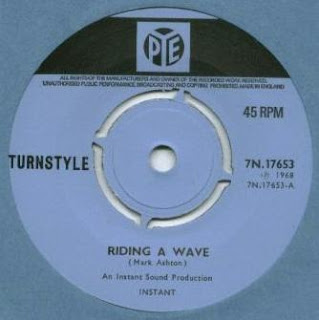 One of the things I've always loved about British Sixties pop-psychedelic music is it's overwhelming use of strings on many of it's records. It has always been perplexing to me that British major labels (especially, I've found, Pye and Deram/Decca) afforded acts with no hit history (or even a history period!) such lavish studio affectations like string sections. Turnstyle are one of those acts. I've no clue who there were, where they were from, in fact I paid scant little attention to this record when it's "A" -side popped up on Bam Caruso records 1988 LP compilation "Professor Jordan's Magic Sound Show" Rubble 10 (which plumbed the Pye/Piccadilly archives ). Years later I won a pile of Pye psych pop 45's from a seller on E-Bay and lying within was this Turnstyle 45 and I still failed to notice it's genius. In fact I foolishly sold the 45 and it was not till The Embrooks began covering it that I went back and investigated it (still kicking myself these days over it as I last heard it was going for $500-$1,000).
"Riding A Wave" starts with a male vocalist singing "I'm sitting down by the sea, thinking about my problems..." accompanied by some sappy strings. But as soon as the opening verse is done it all gives way to some chunky guitar and bass that recall the ballsy late '66/early '67 Move material and the punchy chorus "and my mind says I'm happy and I'm riding a wave", delivered rather passionately. Pretty soon the strings are sawing away at a frenzied pace meshing themselves perfectly with some blistering guitar licks reaching a monstrous crescendo during the break. Magic!! All this orchestral lush-ness expended on a bunch of nobodies?! What were the A&R men thinking back then? Luckily for us I guess they Kinks and Petula Clark records funding their coffers on such idiosyncratic expenses! The flip "Trot", is another cliched British psych pop example:the flipside that sounds like an almost entirely different band. Luckily in this case it's not an issue because it's still good. There's no strings, just crunchy mod/freakbeat gritty power chords chugging out a primitive sub-Troggs/Loot style riff and a sneering vocalist who sounds like some Dickensian street urchin as he leers "This is the season for hanging 'round here..". It picks up and gets somewhat heavy with a rave up of sorts towards the end with some chunky guitar solo work.
Luckily both cuts are available on an RPM CD "A Glass Menagerie" that compiles late 60's Pye psych tracks.
And you can hear them here :
"Trot"
http://www.youtube.com/watch?v=0HW9qz8j02Q
"Riding A Wave"
http://www.youtube.com/watch?v=bpK-p19JMxs
By Wilthomer - July 01, 2009

Killer 2 sider indeed. The liners of "A Glass Menagerie" CD comp indicate that the band hailed from the Kent area and only were a band for less than a year.

The 45 was released on 29th November 1968 according to the A to Z of "The British Psychedelic Trip - Part 19" printed in Record Collector about 10 years ago.

I thank you sir for your info!!