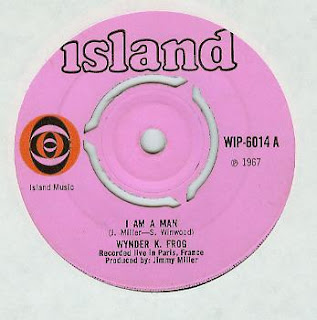 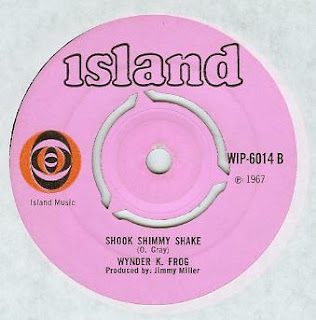 Few people can deny the dance floor intensity of a good storming Hammond and horns driven instrumental track like "Bert's Apple Crumble" by The Quik. And right alongside of it, in my estimation is Wynder. K. Frog's instro interpretation of The Spencer Davis Group's "I'm A Man" .


Led by Hammond virtuoso Mick Weaver the band's line up shifted constantly, often employing the likes of session musicians during their studio time. I haven't a clue who was on this 45. I'm particularly struck by it's A-side "I'm A Man" because it is alleged by music weeklies at the time to have been recorded live in Paris at one Brigitte Bardot's (you know, that wrinkly animal rights Nazi Gallic gasbag) birthday party on September, 28, 1966, the very same day of my arrival on this planet. As you can see a scan of the 45 label reveals it was "recorded live in Paris". For those not familiar with it you can imagine, if you will, an amped up take on the S.D.G.'s original without the vocals but a "party" atmosphere: lots of cat calls, whistles, hoots and hand claps with a slightly off key backing chorus shouting out the chorus when it comes up. All diligently wrapped around a saxophone and Hammond organ duel juiced up by some tasty percussion, it's rough and raw, but it moves. Though the band DID play B.B.'s birthday party in Paris, the 45 was actually recorded in a studio in London. So much for hype!

The flip side "Shook, Shimmy, Shake" is toned down a bit, but still quite funky AND cool. The organ style is reminiscent of the Jamaican keys legend Jackie Mittoo and even the horns have a slight ska rhythm to them (it is no surprise that Island records took their ska/soul legend Jackie Edwards and utilized a Wynder K. Frog song "Oh Mary" as his backing track for his "vocal" version of the same number). Any "ska" detection on this tune is of course because it's an instrumental cover of a track by the ska/rocksteady legend Owen Gray previously issued on the label in 1965 as WI 252.

"I'm A Man" recently cropped up on one of the "On The Brink: Return of the Instro-Hipsters" CD compilation put out by the Psychic Circle label and both tunes are available on the Wynder K Frog double CD "Shook, Shimmy & Shake: The Complete Recordings 1966-1970".