Beat Has Been Aggro Mayhem! 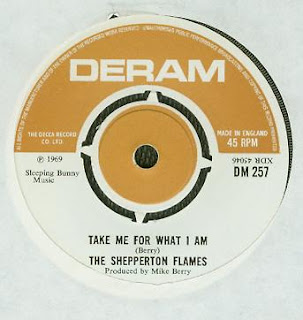 Deram was one of those weird labels who put pretty much anything out, from David Bowie to sitar sounds of Chim Kothari or elevator pap like The Roberto Mann Singers. So it should be no surprise that someone at the label let the one time early 60's U.K. beat sensation Mike Berry (who by 1969 had no doubt seen better times) put this together. Now I can't be certain that Mr. Berry is singing on this, it doesn't sounds like the guy who crooned the brilliant "Lovesick" (U.K. HMV 1964). Anyway he is the composer of both sides and producer as well, but since it didn't show up on the discography on his website it's probably a safe bet that he's not singing on it.

Side A "Take Me For What I Am", is an upbeat, double tracked vocal beat number, complimented by a catchy riff played by the backing guitar and combo organ. The riff is quite infectious and isn't easily forgotten, the number itself sounds like it could've been a Honeycombs track. As on the flipside there's lots of (presumably) dubbed in audience noise that threatens to overwhelm the music (much like Simon Napier Bell's fake audience on the John's children "Orgasm" LP).

Side B's "Goodbye" is a perfect "fade out", "good night folks" type number, and the possibly dubbed in screams add to the "end of the show feel". It's fast paced, based around a repetitive organ riff (cheezy enough to be a Vox or Farfisa). The vocals are delivered rapid fire and venomous enough to be Johnny Rotten, right down the the over emphasized rolling of the syllables at the end of each word: "hey girl, say girl, on your way girl I won't be around, no more heartbreak, no more heartache find another clown...goodby-eeeee". Amazing, even more so when you think in 1969 Deram were knee deep in wanky, over indulgent predictable crap like Ten Year's After (10 minute guitar solo anyone? No thank you). I'd much prefer this Mike Berry 2-3 minute aggro pop any time over Woodstock dinosaur rock!!

The Mike Berry who was active as a producer in the late '60s, early '70s was not the early '60s singer and Joe Meek associate.