Back in the late 80's and early 90's when I SERIOUSLY got into 45 collecting (of the U.K. 60's variety that is) nobody wanted U.S. pressings of U.K. mod/psych/freakbeat stuff, everybody was after British pressings.  But I couldn't give a shit, I was into the music on the record and hearing it and letting other people hear it, not collecting it like some freaking freakbeat 45 version of "The Simpsons" Comic Book Guy! So I'd buy the U.S. pressings, I think my first coup was this one, given to me by my pal Keith Patterson back in '89 or '90. 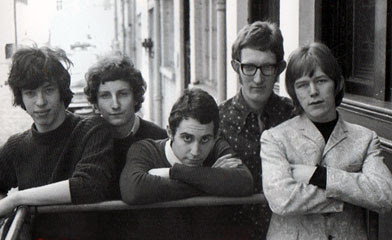 For those not in the know the Attack were a band lead by a young cat named Richard Shirman who had what the chicks call a "slight Jagger-ish look about him".  He sang on all of their records and the band charged pretty frequently.  From what I can gather the line up on this 45 was: Shirman on lead vocals, future Nice member Davy O'List on lead guitar, Gerry Henderson on bass, Bob Hodges on organ and future Plastic Ono Band/Marmalade dude Alan Whitehead on drums.  This was their second 45 (their first was a cover of The Standell's "Try It" b/w with a soulful raver called "We Don't Know" written by Shirman, Henderson and O'List and released as Decca F 12550 in January 1967).

Well the band's management decided they needed a hit and dug up a track called "Hi Ho Sliver Lining" for them to record, unfortunately Mickey Most had the same idea for recently demobbed Yardbirds guitarist Jeff Beck who was launching his solo career with the very same record over at EMI's Columbia imprint ( DB 8151).  The Attack's version was released on March 3, the Jeff Beck version exactly seven days later.  Guess which version went to #14 and saw it's artist on "Top Of The Pops" etc plugging it? History might remember the Jeff Beck hit, but we'll remember The Attack's version for it's B-side. 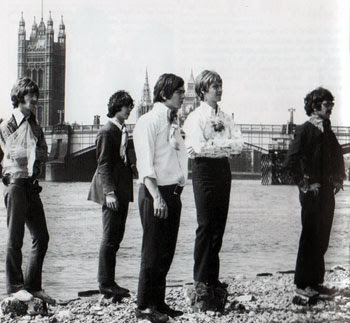 Regardless "Hi Ho Silver Lining" is a pretty daft tune regardless of who's doing it, luckily The Attack, as was their forte for awhile, had a Shirman/Henderson/O'List original up their sleeve on the flip side! "Any More Than I Do" should have been the A-side.  I first heard the track back in the mid 80's on Bam Caruso's best "Rubble" volume of them all "Rubble Five: The Electric Crayon Set" and to say it blew my mind is a bit of an understatement. From O'List's blistering lead guitar intro to Shirman's angst ridden vocals it's a mid 60's mod/freakbeat classic. The band's pedigree for soul/r&b from paying their dues on the mod-soul circuit pay off as the backing musicians play like a high octane Artwoods pumping it out with O'List's guitar pyrotechnics light up the record and Shirman confidently bellows "we want something uncomplicated, something that is not frustrated, we want something clean and free, this is the way it's got to be..".

The Attack would then go on to make their third single, again at their managements suggestion, which clashed with another artist's version, which we previously mulled over at:

Both sides were issued on the authoritative Attack CD compilation "About Time:The Definitive Mod-Pop Collection 1967-1968" (still in print!) which negates all previous dodgy Attack LP/CD compilations! 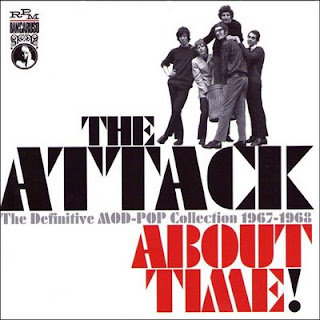 Email ThisBlogThis!Share to TwitterShare to FacebookShare to Pinterest
Labels: The Attack