My fave 60's band from Downunder will always be The Easybeats. Led by diminutive lead singer Stevie Wright, the band featured guitarists (and the band's songwriters) Harry Vanda and George Young (older brother of future AC/DC brats Angus and Malcom and younger brother of Alex aka George Young of the band Grapefruit), Dick Diamonde on bass and Snowy Fleet on drums (later replaced in 1967 by Tony Cahill of Aussie ravers The Purple Hearts) they cut a slew of singles and LP's from 1965 to 1969. There will always be a warm spot in my heart for that magical U.S. United Artists 45 (see below) that came into my hands as a 60's obsessed pre-teen setting off my intro to them and seeing as they haven't gotten much press here I figured it was time to give them some............


1. "Sorry"
My first hearing of this was NOT the original, but a version by The Three O'Clock, though I duly went out in early 1984 and purchased the amazing Rhino LP comp. "Friday On My Mind:The Best Of..." and immediately my mind was suitably blown by this catchy bit of power pop/mod magic.

2. "The Shame Just Drained"
This track was left over from a session towards the end of their career it's one of my faves despite being somewhat rough with some killer high noted harmonies and some nice solid bass. Not bad at all for a throwaway track and later the title track for an Easybeats LP compilation of rarities and curios. 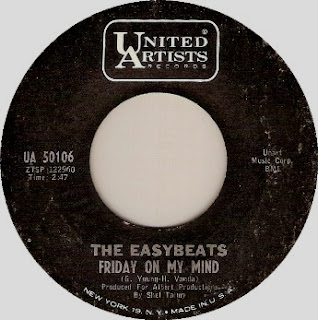 3. "Friday On My Mind"
Ah back where it all began.  There are many other numbers by them that are better than this (as you can read) but it's still the song that introduced me to them and in the 80's/90's as a healthy young man an anthem of sorts as dating always involved going to see a girl in a city.

4. "It's So Easy"
Way back when (1987-1988 to be exact) I was in a band who later became The Insomniacs.  Our lead singer and a good friend of mine David Wojciechowski introduced this Merseybeat style "beat ballad" to us at rehearsals from his well played copy of their debut LP "Easy".  I didn't like it at first but it grew on me and still reminds me of us rehearsing in my tiny bedroom at my parents house.

5. "Goin' Out Of My Mind"
This 1966 monster came into my life courtesy of the essential 60's Aussie various artists "Ugly Things" LP's in the mid 80's. This is a stormer in total Kinks/Troggs fashion and later a staple of many an Insomniacs set. It still has power and vitality to it 27 years later with it's Kinks style power chords, incessant/catchy riff and typical high backing vocals.

6. "Falling Off The Edge Of The World"
The band cut a few soppy ballads (like the abysmal "Hello How Are You?" which this tune was the flip side of) and it wasn't exactly their best genre but I'll make an exception for this one because it's so magnificent.  It's high harmonies, excellent key changes and jaded lyrics ("and even the children see that you don't stay respectable now")  all work. Pretty heavy stuff from a bunch of guys in their early 20's.

7. "Fancy Seeing You Here"
Another late era track from their '68 LP "Vigil" (their last) with some jangly/melodic guitar work that sits right up front and strikes me easily as one of their most memorable riffs with layers of their well honed high pitched backing vocals.

8. "Good Times"
From it's catchy, soulful intro (with vocal help from Steve Marriott) this number is a non stop groover and easily the closest they ever got to soul/r&b.  Maybe it's the cowbell, or the subtle 12 string or Marriott's raw backing vocals on the chorus but this number sounds like what you'd have gotten if the Who jammed with the Spencer Davis Group.

9. "Saturday Night"
Gritty and almost leering, lead singer Stevie Wright sounds like that juvenile delinquent punk on the corner as he lazily drawls the tale of a goddess who just appeared on the pavement before him beneath catchy /incessant "na na na" backing vocals, powerhouse drumming, Who/Kinks power chords and high Who/Creation/Kinks style backing voices all reaching a crescendo amidst the hushed middle bit. 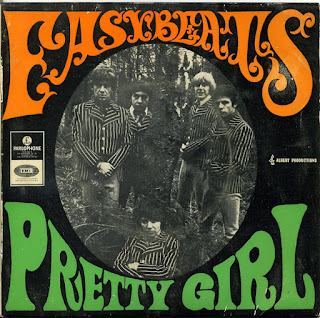 10. "Pretty Girl"
Found on the flip of the mediocre "Heaven And Hell" this Shel Talmy production (he recorded several tracks with the band in the U.K. in '66-'67) starts with layers of cool Merseybeat style harmonies with the playing and vocals becoming more intense as the track goes on with the oft mentioned groovy Who style backing vocals. 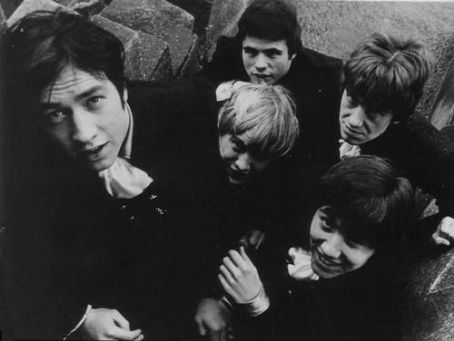 I'll chime in with a couple more:

Sad and Lonely and Blue

Starts with chiming steel strings, which take what could have been a soppy ballad and turn it into a folk rock builder

Who'll Be The One

The follow up to Friday (and the a-side of Saturday Night). In truth a mish mash, but the rumble of twin guitars and bass in the second verse is worth the admission price on its own.

Friday On My Mind is an object lesson in arrangement. Shel Talmy's suggestion of a stop before the final chorus to fade is well known. But sit down and listen to how Vanda & Young's guitar parts intertwine. Awesome.