The Who: Quadrophenia - Can You See the Real Me? (documentary)


Last night in 500 places around the country North Americans were treated to a special one night only engagement in theaters for the screening of an hour and a half long documentary on The Who's 1973 LP "Quadrophenia". I suspect it has already been shown in the U.K. as until yesterday an hour long version with a BBC logo in the corner was on YouTube, it has since been withdrawn thwarting my efforts to link it here!

I duly set out to a nearby theater with my three faithful chums to see what it was all about.  I was pleasantly surprised.  With Pete Townshend and Roger Daltrey (and archival footage of the late John Entwistle) telling the story of the original LP it was enjoyable on their recollections alone.  And is it me (for a moment, for a moment) but is Pete slowly morphing into Donald Pleasance? What sweetened it was a variety of things.  There was loads of original 60's footage of mods being interviewed, shopping for clothes, dancing and even the moron element in Brighton on scooters and fighting rockers. There was even a snippet of Mickey Finn & The Blue Men playing their ska'd version of Bo Diddley's "Pills" live in the 60's!!  There was legendary mod Irish Jack sitting in a pie and mash shop with Pete and "Mods"/"Maximum R&B" author Richard Barnes chatting about mod (both figure quite frequently on their own in the documentary with Jack even walking you through the former location of the famous Goldhawk Social Club).  Original 60's mods and longstanding "Who family" associates Bill Curbishley (manager) and John "Wiggy" Wolff (tour manager) are on hand to discuss the 60's mod scene and the band's disillusionment and subsequent disengagement from herion addled managers Chris Stamp and Kit Lambert. Curbishley is seen wearing a nice pale purple cashmere v-neck, inspiring me to go out and order one this morning! Original LP engineer Ron Nevison and Pete Townshend alternately play various mixes of the album and highlight certain pieces of its songs . Photographer Ethan Russell is on hand with lots of discussion on the LP's original photo booklet and the  "model" who played "Jimmy" (aka "Chad", real name Terry Kennett who passed away last year) as well as two ladies who featured as mod girls in the photos.  Best of all no Bono, who's pretty much a required fixture in most rock n' roll documentaries. Add lots of great footage of Brighton and the Palace Pier and of course the actual songs themselves and you've got a great little documentary which will hopefully be available elsewhere. If you're a mod or ever were one or a Who fan I highly suggest you check it out.

It's also been recently announced that The 'Oo are taking to the road again to play the entire LP in honor of it's 40th anniversary kicking off on November 1st and running into 2013. 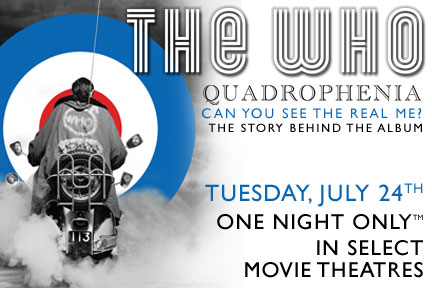 It was great, wasn't it? I thoroughly enjoyed it as well(when indeed it was on TV over here a short while back). Glad you got to see it too.

The presentation in Montreal is on August 1st. Can't wait!