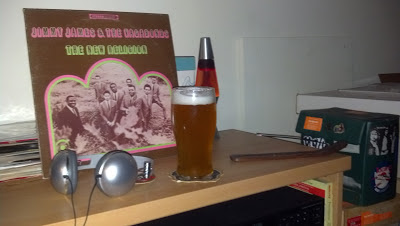 1. THE RADIANTS-"Voice Your Choice"
Quite common I know but this one has always been a fave that I've overlooked for quite some time till I was doing some research for a future entry on my Top Ten Chess records 45's. The perfect vocal parts are accented by some subtle horns and guitars maker it all work that.

2. THE STOCKINGTOPS-"I Don't Ever Wanna Be Kicked By You"
Easily the most soulful record ever laid down on the British Isles. The Stockingtops were a duo called Sue And Sunny and cut this Shuman/Lynch number in 1968 with orchestration by John Paul Jones. It sounds like The Flirtations, only better, yes I actually said/wrote that.

3. JIMMY JAMES & THE VAGABONDS-"Do It Right"
I finally came across a moderately priced copy of their 1967 LP "New Religion" (with way out liner notes by their manager, one hepped up hip cat named Peter Meaden) after oh..what two decades?  What can I say.  I know it's 3/4's covers but let me tell you I've no idea how Geno Washington was allowed to stay in the U.K. (and on the same label) as Jimmy James and Co.  Jimmy's voice is amazing and the backing is tight and there's not a really weak track on the whole album.

4. . THE GRAHAM BOND ORGANIZATION-"Cold Rain"
If you haven't twigged it yet I'm a BIG fan of U.K. 60's r&b, especially the "Hammond n' horns" variety so Repertoire's new 4 CD G.B.O. box set "Wade in The Water" is getting some heavy rotation here.  This unreleased number from '66 was composed and sung by Ginger Baker.  Presumably it wasn't released before because their label (Columbia) were no doubt none too keen on what sounds to me like a junkie's biography put to music.  Made extra punchy by some amazing brass blasts and Bond's Mellotron emulating vibraphone. the father of  "Pressed Rat And Warthog".

5. OCEAN COLOUR SCENE-"Hundred Mile High City"
I never cared for anything I'd heard from these guys, they weren't bad they just never grabbed me.  I heard this one again a few weeks back and it struck me because it sounded like it wanted so much to be Thin Lizzy (whom I happen to dig in small doses) and now it's a favorite.

6. THE MAGIC MUSHROOMS-"I'm Gone"
Cobwebs in the brain.  I was looking at some old pics I took in the late 80's/early 90's of my friends The Insomniacs and I remembered them covering this obscure U.S. 60's garage number.  In the 80's when everyone was raving about "Back From The Grave" and U.S. 60's garage I was a "Rubble" man and looking for 45's by The Human Instinct.  I've got a lot to learn about my own backyard, like monster tunes l,ike this.

7. RONNIE LANE-"Anyone For Anymore"
Magic harmonies on this track, Ronnie sings like a chorus of angels. A lot of his stuff is a tad too "country" or bordering on that Fairport Convention earthy thing that's not at all my bit but when he got it right, he got it right. Ya know what I mean?

8. GERRY & THE PACEMAKERS-"Bright Green Pleasure Machine"
Yeah I know don't laugh, anyway Gerry and Company's hit making days were long dried up by '67 when they released this Simon & Garfunkel cover.  I guess someone at EMI thought it might bring them back.  It didn't (neither did a solo version of The Bee Gee's "Gilbert Green" later that year).  But their take on it is quite good, a bit more slick than the original but still catchy and suited for Gerry's cheeky chappy shtick.  And hey you can't go wrong with Simon & Garfunkel.  Which leads us to....

9. CHAD & JEREMY-"Manners Maketh Man"
One of the more interesting things about being an anorak is you have more music than you have time for.  Case in point, a few weeks back this tune popped up on a 1,000+ song playlist I created ages ago on my iPod and I thought it was some Simon & Garfunkel LP track I'd overlooked!  Well it wasn't, it was Chad & Jeremy from their "Ark" album.

10. THE WATCH CHILDREN-"Pictures"
The Watch Children were a short lived four piece who grew out of 80's New Jersey psych band The Laughing Soup Dish (responsible for an amazing Syd Barrett Floyd meets 13th Floor Elevators 45 on Voxx called "Teenage Lima Bean" in 1985). And like Syd's Pink Floyd The Soup Dish got lame after their original members (bassist Elana Papavero and guitarist Marc Saxton) jumped ship and formed this group. Culled by my pal Mike Sin from their  cassette tape "How Does It Feel To Be So White?" it's a perfectly '67 Floydian experience.  Buried beneath a layer of swampy phlange and fuzz Marc croons in a very Barrett-ish way "see my picture I like very much, I mean I like it now that I've had it retouched, I haven't changed too much since then but I'll never look that way again...".  Almost like "Vegetable Man".