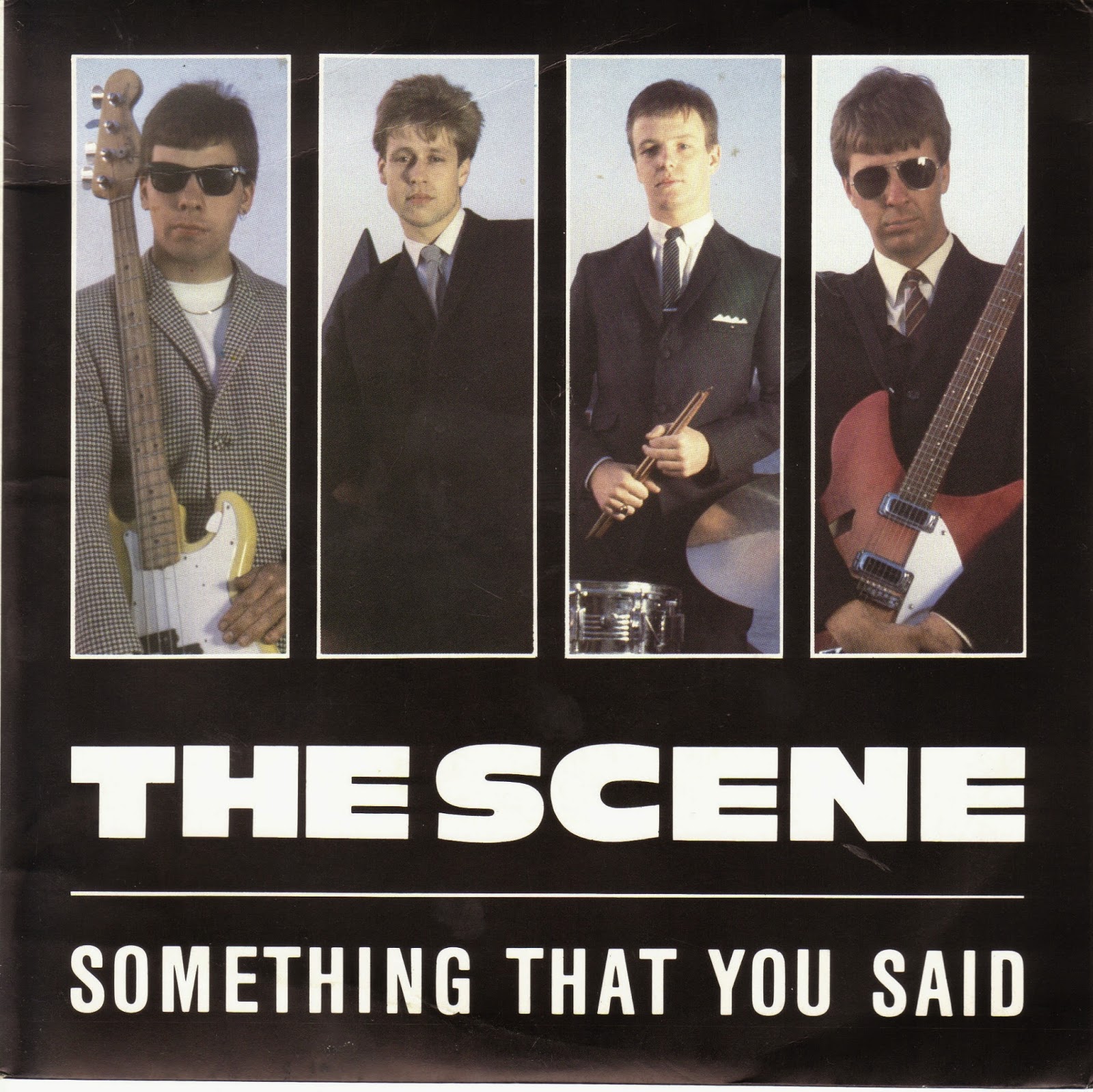 1. THE SCENE-"Something That You Said" Diamond (U.K.)  DIA 003 1984
When I was in London in September 1984 the band on EVERY mod in town's lips were The Scene.  The late great Jimmy at the Merc was kind enough to spin it for me and I brought six copies home with me to spread among the faithful. Beneath a driving beat and a catchy chorus of "ba ba baaa's" "Something That You Said" swings from start to finish with crashing Rickenbackers jangling out an infectious little groove and in the process shitting all over every other "mod" record at that time.

"Something That You Said" appeared on the now out of print mod CD compilation "This Is Mod Volume 3: A Diamond Collection"  and on the Cherry Red records mod box set "Millions Like Us (The Story Of The Mod Revival 1977-1989").

2. BIFF BANG POW-"There Must Be A Better Life" Creation (U.K.) CRE 007 1984
Coming on as bleak as a b&w early 60's kitchen sink drama this  tune is dosed with a splash of psychedelic technicolor care of some backwards guitar buzzes, Pink Floyd-ish spooky keyboards and disjointed jangling guitars giving it a "Roger McGuinn and Syd Barrett on the Dole" feel. It's depressing as fucking hell but oh how entertaining. Sadly Biff Bang Pow never got the due they deserved but the label and the band's leader Alan Mcgee did of course in time with music that was far beyond my scene or head.

"There Must" Be A Better Life" appeared on the box set "The Children of Nuggets: Original Artyfacts From the Second Psychedelic Era 1976-1996". 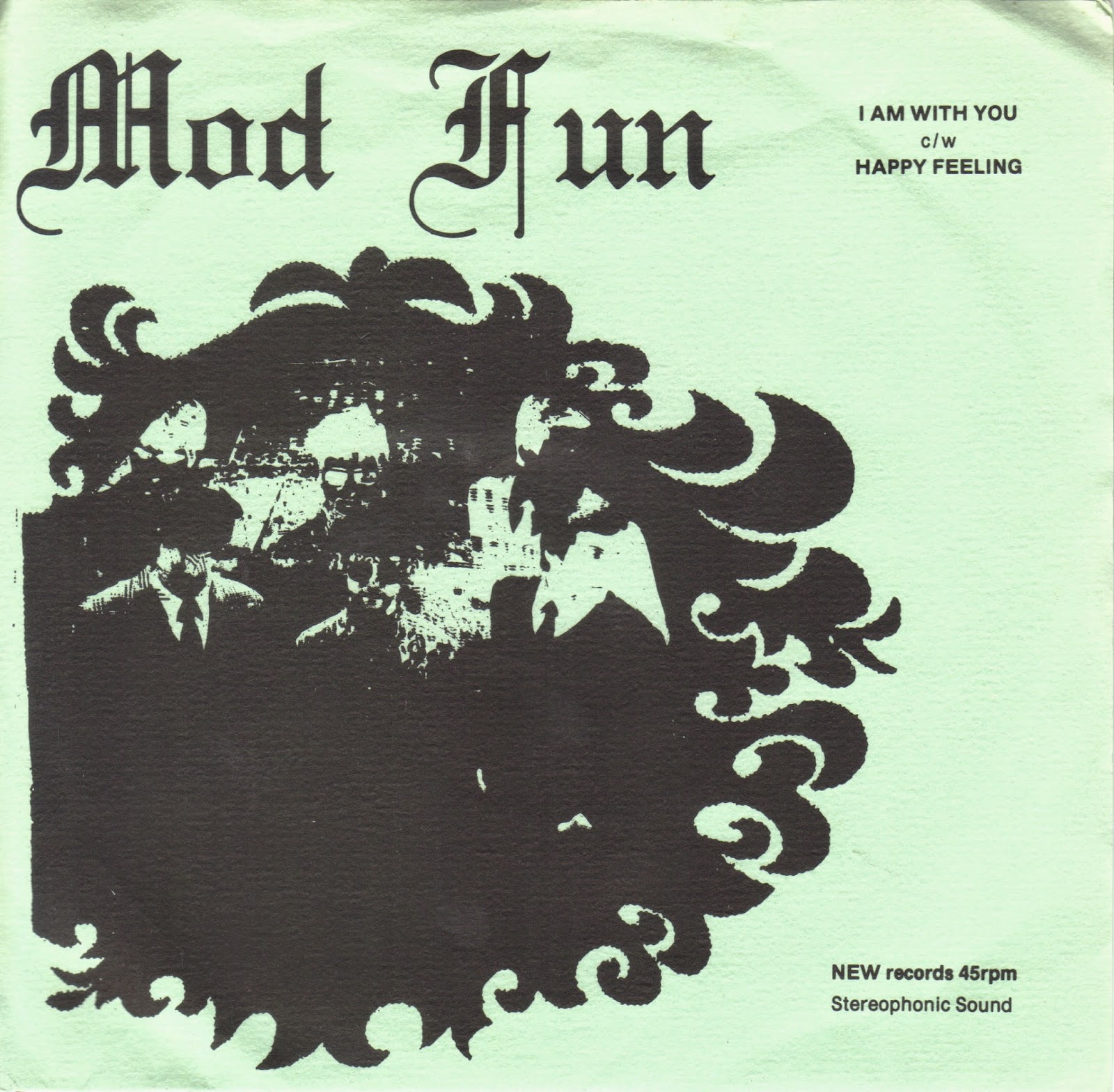 3. MOD FUN-"I Am With You" New Records (U.S.)  MF 001 1984
From the intro of some dialogue from the 60's "Batman" TV show to the opening musical fluid jazzy bassline and wall of guitar coated in fuzz and distortion "I Am With You" spoke to the mod minority like me who were comfortable with psychedelia and garage sitting alongside more "traditional" (read "stereotype") mod trappings.  Hailing from my home state of New Jersey Mod Fun were my local team from the moment my nearby hip college radio station ("WPRB Princeton") spun them one Friday night in the Spring of 1984 and at last I had an American band I could identify with who weren't from 1965. The music spoke to me.  The lyrics did too: "I got a Rickenbacker baby now, and that's the way it should be. I'm gonna sit right down and play it right now won't you listen to me. I got some 2-Tone records sitting on my shelf and that's the sound for me and you know what you and me we're free to do what we want and what they want to be is what they are not...". And when the NY/NJ 2-Tone mod mafia were not down with freakbeat and garage slant of Mod Fun the lyrics onstage became "I got some 2-Tone records sitting in the trash and that's the place for them and you and me we're free to listen to Syd...".

A remixed version of "I Am With You" appeared on the Get Hip Mod Fun compilation CD "Past Forward" and on the Cherry Red records mod box set "Millions Like Us (The Story Of The Mod Revival 1977-1989"). 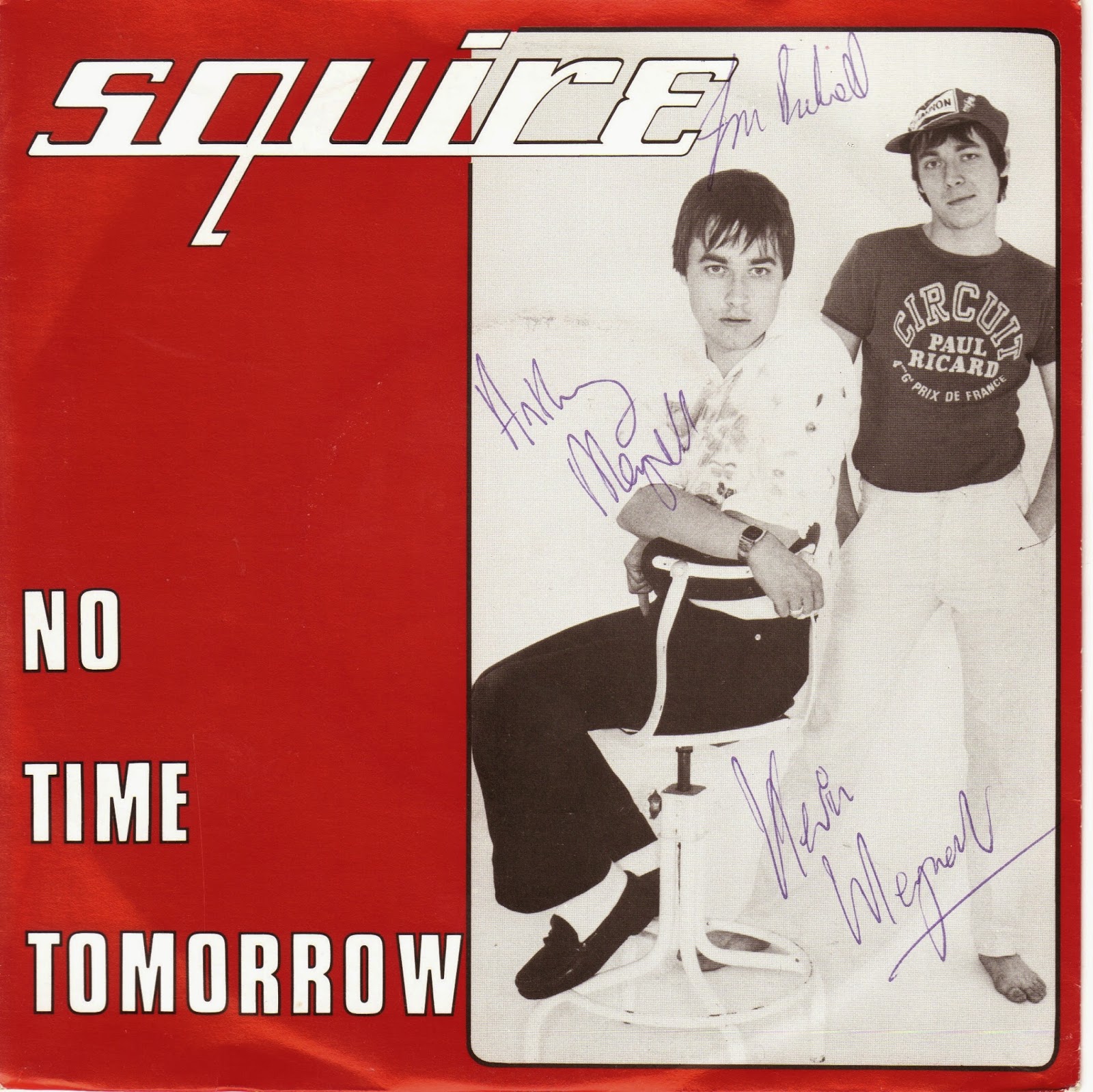 4. SQUIRE-"No Time Tomorrow" Hi-Lo (U.K.) HI-001 1982
It's February 1982, The Jam are a few months away from jacking it, Secret Affair are running on fumes and The Lambrettas have released a Jefferson Airplane cover that sounds like Duran Duran but my fave '79 mod band Squire are now down to lead singer/main man Anthony Meynell and brother Kevin on drums. Together they trip the light fantastic with some Casio psychedelia kicking in with Beethoven's "Symphony No. 9" (number nine  number nine number nine?), a brilliant "Revolver" style backwards guitar solo and something more lysergic than the I Was Lord Kitchener's Valet kitted out Mood Six WISHED they were musically.

"No Time Tomorrow" is available on the Squire compilation "The Singles Album" and for download from iTunes.

5. THE OPTIC NERVE-"Ain't That A Man" Cryptovision (U.S.) CR-800 1986
This group of NYC garage fellas was the nexus of talented  musicians Bobbie Belfoire and Tony Matura (and revolving bass player/drummer slots worthy of Spinal Tap).  August 1986's "Ain't That A Man" swung forth on the ultra hip Cryptovision label (who already boasted what would be the final Mod Fun products the "Dorothy's Dream" LP and a 45 "Mary Goes Round" as well as 45's by the label owners band The Stepford Husbands).  Under the twin Rickenbacker attack of Bobbie and Tony "Ain't That A Man" swings like Bakersfield, CA folk rock but without sounding like yet another shit 80's band trying to sound like The Byrds (though they did a hell of a good job of looking like them that's for sure).

"Ain't That A Man" appeared on the box set "The Children of Nuggets: Original Artyfacts From the Second Psychedelic Era 1976-1996". 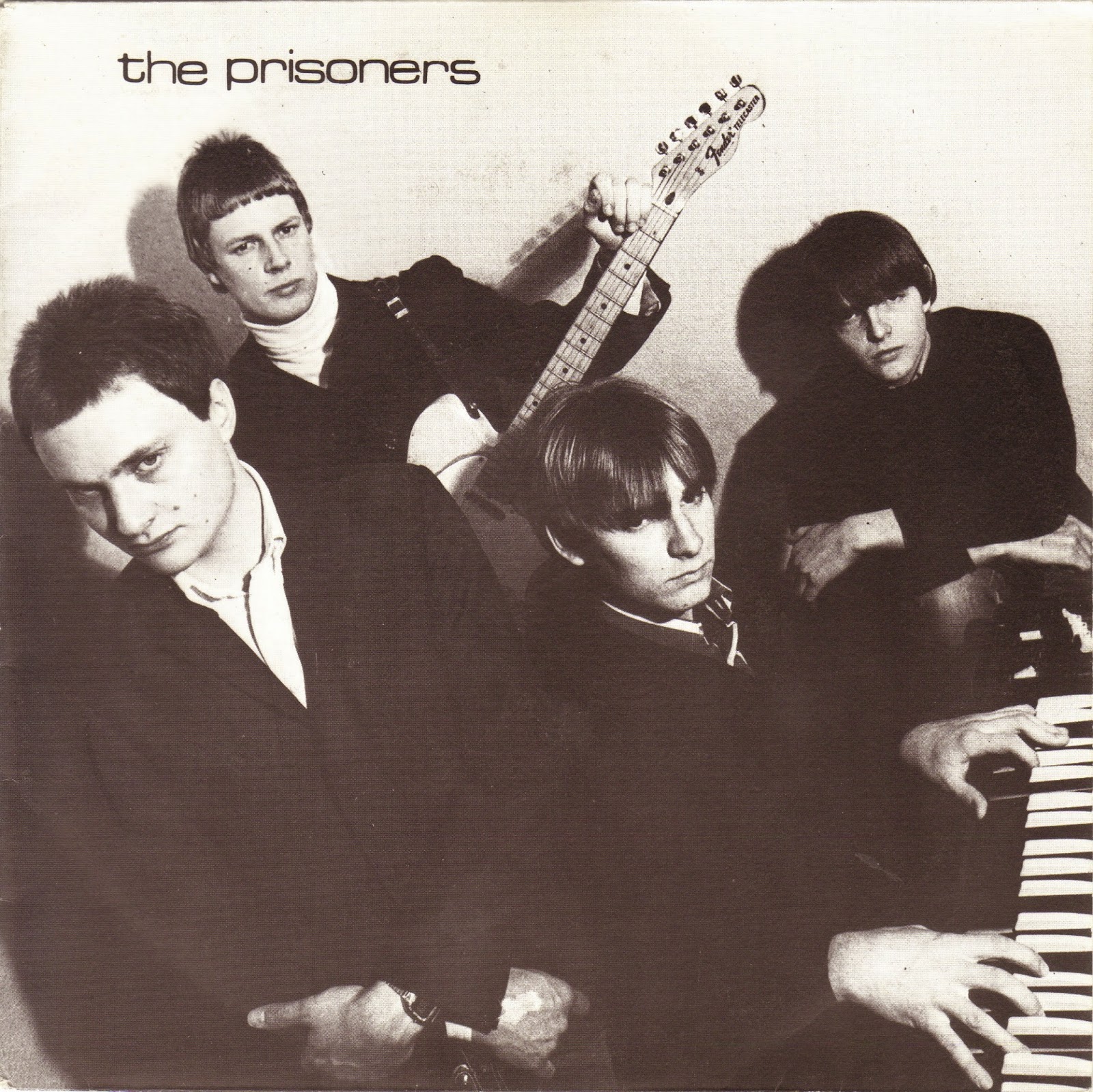 6. THE PRISONERS-"There's A Time" Sky Dog Records (France) SKI 6103 1983
In my book The Prisoners were and always will be Medway's finest. This was their somewhat dodgy debut 45 (dodgy not in quality or delivery but origin) from 1983. I'll explain why. When I met Graham Day (their lead singer/guitarist) in 1988 he told me that this 45 ("There's A Time") was put out by "some dodgy Frenchman", meaning the band never saw a dime from it. Regardless it's a monster of a tune from keyboardist Jamie Taylor's frantic Farfisa to Graham Day's growl and his Dave Davies style frenetic mid 60's guitar solo it's one of my faves by the band AND from the 80's.  It was distributed here in the States by Midnight Records, a NY label/company run by a French gent and somehow flooded New Jersey/New York record stores. I sent copies to a pen pal in the U.K. (Debbie Jones) whom I am eternally grateful to for turning me on to these guys because no one in England could find it!

"There's A Time" was issued on the Big Beat Prisoners compilation CD "Hurricane:The Best Of The Prisoners".

7. PLASTICLAND-"Flower Scene" Midnight Records (France/U.S.) MID 4510 1985
Milwaukee's psychedelic connoisseurs and premier U.S. 80's band of that genre issued this 1985 single on Midnight Records and I snagged it hot off the presses as Midnight's Svengali J.D. Martignon was hitting them with the price gun at their now defunct shop on West 23rd Street (just across from the famous Hotel Chelsea).  Written as a homage to a magazine from 1967 called "Flower Scene" brought back from England in the 60's to one of the band members by his sister it has all the usual trippy Plasticland trademarks though there is also a great deal more of an edge to this than usual with some Who-ish power chords underneath the usual freaky lyrics, raga noodlings and "Tomorrow Never Knows" drumming.

"Flower Scene" was issued on a Plasticland compilation titled "Make Yourself A Happening Machine" and is available for download from iTunes. 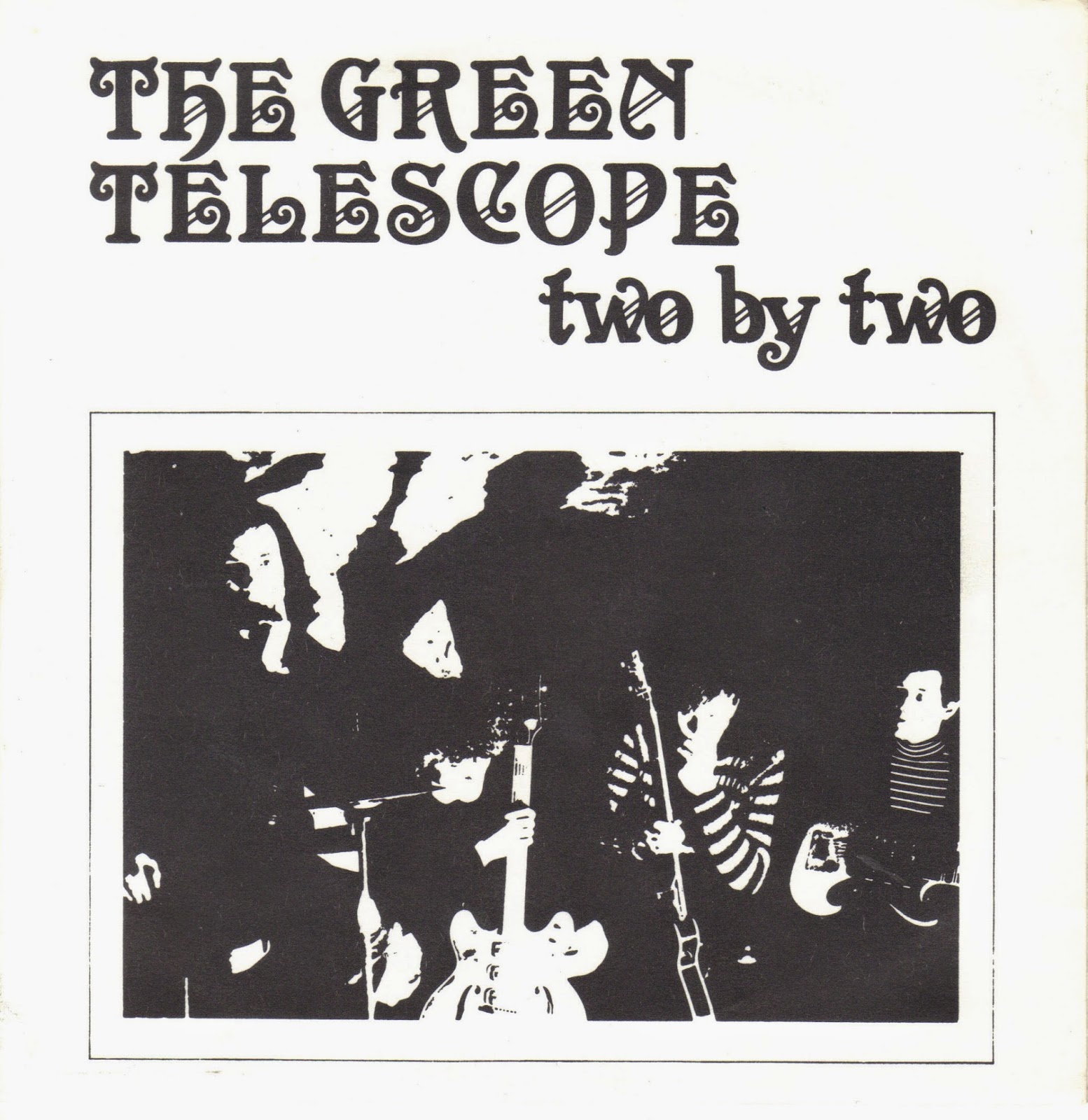 8. THE GREEN TELESCOPE-"Make Me Stay" ("Two By Two E.P.) Imaginary (U.K.)  Mirage 001 1986
I am eternally grateful to the band's main man Lenny Helsing OR my then turned on pen pal Ivor Trueman for sharing this E.P. with me in 1985.  The mind fades as to which of these gents brought this magical E.P. into my possession but it stands the test of time unlike so many other 80's records by "60's" slanted band.  "Make Me Stay" is haunting. There's this jittery paranoia to it beneath the doomed sounding backing vocals and the incredibly cool combo organ topped off by this 13th Floor Elevators meets freakbeat guitar solo. And the whole thing concludes with this mad wash of feedbacking organ and "make me stay, make me stay" reminding me of the Buzz and their frantic ending of "You're Holding Me Down".

"Make Me Stay" appeared on the box set "The Children of Nuggets: Original Artyfacts From the Second Psychedelic Era 1976-1996".

9. THE MILKSHAKES-"It's You" Milkshakes (U.K.) BILK 0 1982
LONG before the whole world became enamored with the low-fi "genius" of Billy Childish it was 1982 and he was just the rhythm guitarist in a little band from Medway called The Milkshakes who at the height of the shittiest time EVER for rock n' roll encapsulated their love for Reeperbahn era Fab Four crossed with the four chord grit of early Kinks/Troggs. "It's You" is a perfect mix of those latter two with it's primitive sharp chords and urgency.

"It's You"  appeared on the box set "The Children of Nuggets: Original Artyfacts From the Second Psychedelic Era 1976-1996" and on their essential collection '19th Nervous Shakedown". 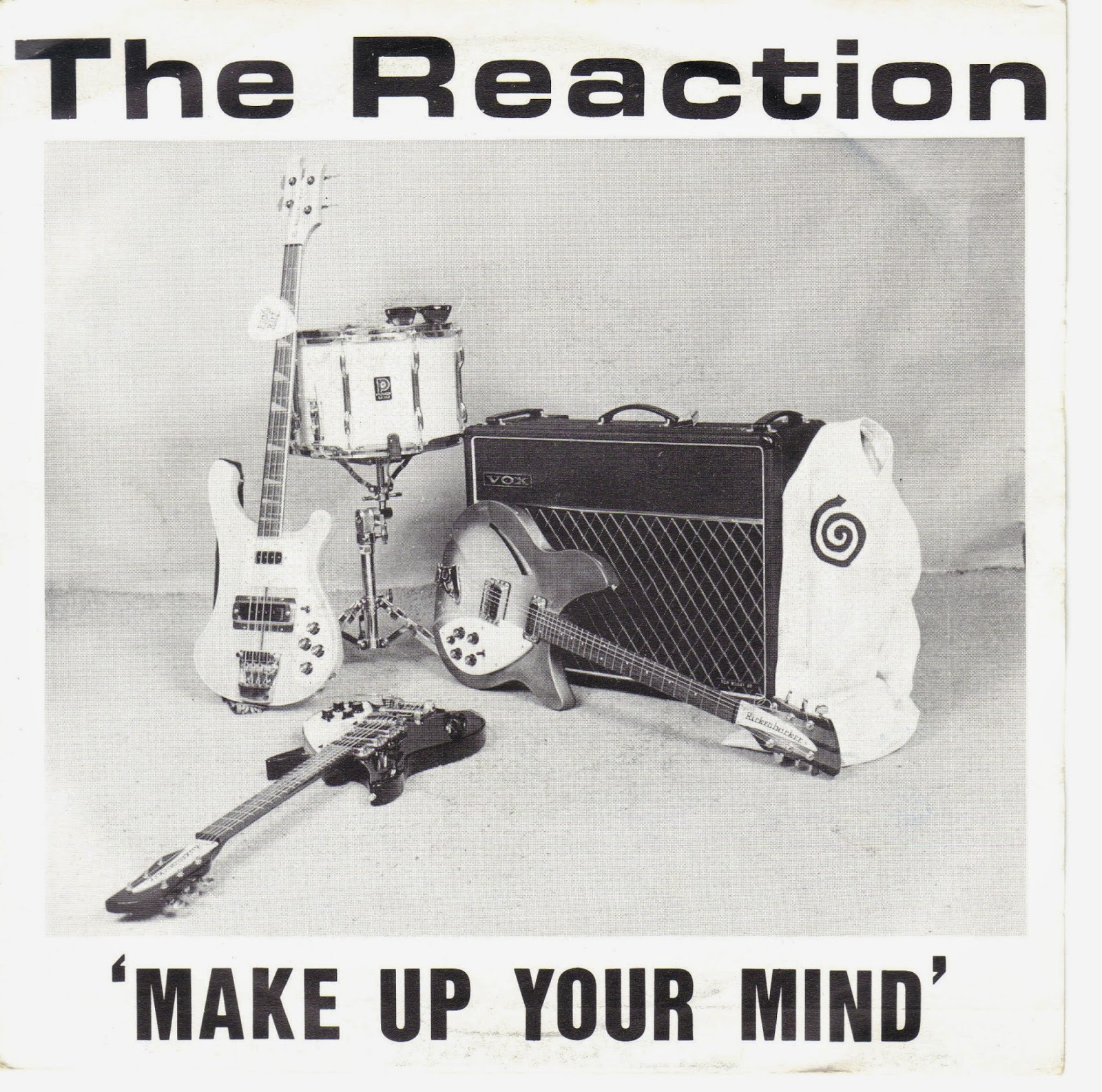 10. THE REACTION-"Make Up Your Mind" Waterloo Sunset RUSS 105 1986
I've always loved this record for a variety of reasons. The band were signed to a "mod" label called Waterloo Sunset which was basically the vehicle for teenage mod boy wet dream/poster girl Eleanor Rigby.  On the back cover photo there's three of the usual mod '86 looking blokes and one freak (and I mean that in an endearing way) with long hair, granny glasses and a paisley shirt. The record is AMAZING.  Imagine a "mod"/British Fleshtones, jangly Rickenbacker 12 string, incessant blowing harp and cool vocals straight off of a mid 60's British beat record.  In 1986 when everyone worshiped Makin' Time or The Moment these guys surely were the odd men out.  I don't recall much about them but I do know lots of folks like me loved the record and still do.  And the "freak" with the long hair? He went on to form The Mystrearted in the early 90's with a bunch of other like minded individuals and produced some first class genuine British garage music.

"Make Up Your Mind" is available for download from iTunes on a compilation called "Mod Tunes:A Three Button Legacy"