Everyone had a crack at taking the piss out of "contemporary music" in the 60's in the U.K. Even Benny Hill had a great swipe at Dylan with his 1965 Tony Hatch produced single "What A World" (Pye 7N15974) but the greatest one in my estimation is the great raspberry blown at psychedelia in the form of  "The L.S. Bumble Bee" by Peter Cook and Dudley Moore released in January of 1967. I'm told it often popped up on Beatles bootleg LP's in the 70's which is hysterical (possibly on numerous dodgy plain sleeved albums along with The End's "Loving Sacred loving" touted by some as a "rare Beatles/Stones jam session"). Moore was quoted in 1981 as writing:

"The L.S. Bumble Bee", Peter Cook and I recorded that song about the time when there was so much fuss about L.S.D., and when everybody thought that "Lucy In The Sky With Diamonds" was a reference to drugs. The exciting alternative offered to the world was L.S.B.!, and I wrote the music to, in some ways, satirize the Beach Boys rather than the Beatles. But I'm grateful if some small part of the world thinks that it may have been them, rather than us" 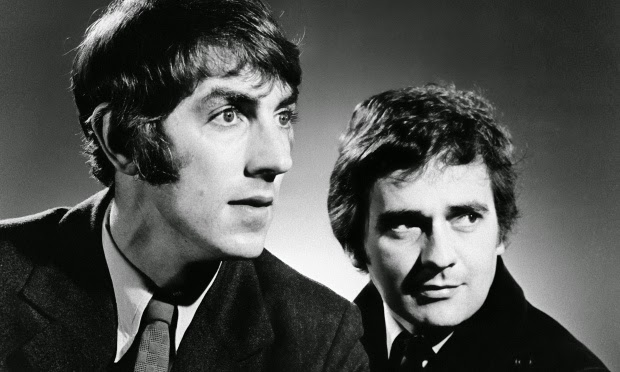 Unlike lots of other satires "The L.S. Bumble Bee" actually sounds psychedelic in it's production and gives one the impression that Messrs. Cook & Moore had probably been psychedelically enlightened, either that or they were quite adept at tapping the pulse of what was "IN" (I'd like to think both but more than likely it was the latter). Though one listen to the firmly tongue and cheek lyrics and you will immediately surmise that there was no serious intention here when Dudley Moore coos "Oh druggy druggy" and  Peter Cook says "freak out baby, the bee is coming" among other quotable phrases.  A midst jangling piano strings, multi tracked  vocals, sea gulls, a crying baby and Cook announcing "and this week's ba ba bumble is for  Al Pherber and his Marijuana Brass and their hit waxing Spanish Bee" it's a psychedelic masterpiece, even if it is purely in jest and it all ends with an explosion right out of the sound affects department and Moore saying "Cor that's better".  The number was premiered on the December 26, 1966 episode of the TV show  "Not Only...But Also" (the same episode which featured John Lennon playing a door man at a hip new London night spot situated in a Men's restroom called "The Ad-Lav").

The flip "The Bee Side" is a fairly mundane Pete & Dud routine with the two of them speaking in character about the dangers of drug abuse, again as with the A-side firmly tongue and cheek.  The duo would go one further in psychedelia at the end of 1967 with their amazing "Bedazzled" single from the film of the same name (U.K. Decca F 12710 and U.S. Parrot 45-PAR-3016 respectively) but that, as they say, is a story for another time.

"The LS Bumble Bee" features on "Mojo" magazines out of print psychedelic box set "Acid Drops, Spacedust & Flying Saucers" and the first volume of the psychedelic CD series ""We Can Fly Volume One". "The Bee Side" has yet to surface (to my knowledge anyway) on any compilations.

I'm amazed that this clip didn't end up in the Moore/Cook DVD that was assembled from the surviving footage, which included a prior appearance by John Lennon in a skit inspired by a poem from his 1st book

and Bedazzled has to be in my top ten favourite films (right up there with The Producers for best-ever comedy).