Don Fardon has graced our page many times before so we'll dispense with any in depth history.  Don fronted the Coventry beat/r&b combo The Sorrows and after an LP and 6 singles (including their only hit, "Take A Heart") he parted ways with them in 1966 to go solo.  His solo career in Germany seemed quite prosperous as today's subject was his 5th single in just two years. Like many of his German releases this single was not issued in the U.K.

The A-side was a cover of the American act Crazy Elephant's sole hit "Gimme Gimme Good Lovin'".  It's a pretty mundane track no matter who's doing it and though it's got some horns on it they sound like a pop record and the whole thing sounds sorta , well, lifeless despite Don's best efforts in the vocal department. 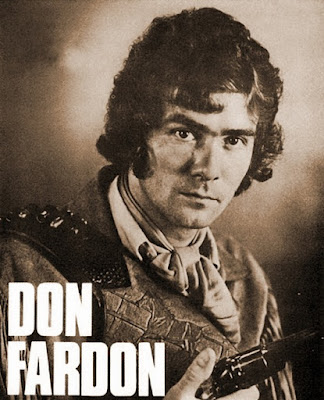 The real gold is on the flip side, "Sunshine Woman" .  Written by Fardon along with Tony Ritchie and Derek Spence (the former cut a US only version of "Coming On Strong" utilizing the back track from Fardon's version) it's one of his strongest tracks up there with "I'm Alive". Starting with some cool bass and bongos it weaves in subtle organ and horns that gradually build to include phlanged piano and then a groovy psychedelic wash on the bridge where horns and catchy guitar merge.  Above all Fardon's strong vocals carry the whole tune that's a perfectly danceable mix of soulful r&b and pop (with mild psychedelic trickery).

Both sides were compiled on  a Don Fardon Castle records double CD anthology called "Coventry Boy" and a CD by RPM called "I'm Alive: 68/69 Hip Pop And Swinging Beat" of Fardon's material from that era. "Sunshine Woman" came to my attention first via one of the short lived "New Rubble" series "Volume Six:Painting The Time" CD compilation.