Here's a weird one for the ages. This was the second Duffy Power 45 issued in the US under the odd moniker of  "Jamie Power". I have long wondered why they made a mistake with the name as it was not utilized anywhere else in the world. It was also his third US 45 release (the previous US issue was 1965's "She Don't Know"/"Love's Gonna Go" as Jamie 1299). Today's 45 entry was issued in 1966 and again utilized "Love's Gonna Go" as the B-side.  We tackled Duffy's first US 45 way back when over here.

"There's No Living Without Your Loving" had previously been tackled by Manfred Mann in November 1965 . Duffy Power's version has an almost folk rock feel to it with it's "Needles And Pins" style acoustic guitar before sweeping strings and horns come in and give it a Walker Brothers feel (dig the horn solo in the middle that totally sounds straight off a Walkers session). The strong spot of it is of course Duffy's adaptable voice.

"Love's Gonna Go" is a far more somber affair, perfectly suited to Power's smoky, blues shouter voice and is the stronger of the two sides for my money. It gets down and gritty when he blows a harp solo in the middle and some twangy guitar licks appear behind the bluesy bass, piano and drums backing. 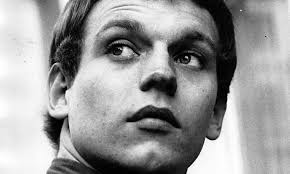 Hear "There's No Living Without Your Loving":