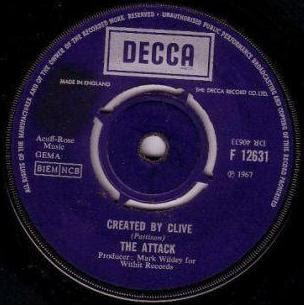 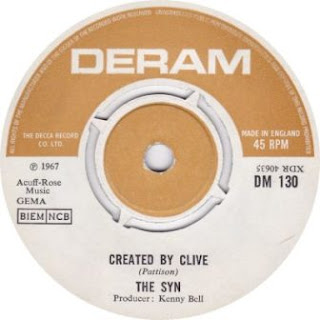 
There are few instances in the history of British pop psych where two bands, both affiliated with the same label, released versions of the same tune simultaneously. On this rare exception I present to you "Created By Clive", released in June 1967 by The Attack on Decca F 12631 AND as the debut 45 for The Syn on Decca's offshoot label Deram, as DM 130. It mattered little because both numbers cancelled each other out and the world was denied the chance to hear a tongue and cheek pop psych ditty about a spurned boyfriend of a dolly bird who's become a model and isn't quite the same again. This was not the first time the Attack had been caught up in a "same track" slug fest. Their previous single (also their debut) was "Hi Ho Silver Lining" (Decca F 12578) was released in March of 1967 in tandem with Jeff Beck's version on Columbia DB 8151 (which became the hit).

To me the Syn's version of "Created By Clive" is far superior. It's simplistic. It's just bass, drums, organ and very minimal guitar in it's instrumentation. The lead vocals are heavily Anglicized but not too over the top either with an almost contemptuous, bored tone that makes you really believe this guy has lost his gal and there's some neat high Who-ish backing vocals. What attracted me to this version when I heard it for the first time was the little combo organ that reminded me of The Doors if they'd been more "kitschy" especially during the little solo and the drums click perfectly with it. Apparently the band hated it and refused to play it live and referred to it as "Created By Idiots".
The Attack's version, in my book, is way over produced. There's a xylophone solo on it for god sakes! The vocals are so affected it almost sounds like a bad Hollywood take on a British "posh" accent and the chorus sounds like a drunken pub knees up (and not in a good time Kinks way) and the whole thing sort of plods along like a wind up music box tune.