The Scaffold's second US 45 made it's debut in May 1968 (it was issued in the UK two months prior as Parlophone R 5679). Their first US release was discussed way back when here, with a bit of background on the band as well.

"Do You Remember" is a quintessentially English number that one could easily imagine playing as someone was punting down the Cam. It's comprised of multi layers of harmonies with a whimsical melody augmented at times by strings and flute that make it slightly trippy at times. It was later re-recorded by Scaffold members Roger McGough and Mike McGear (aka Mike McCartney) for their 1968 LP "McGough & McGear". 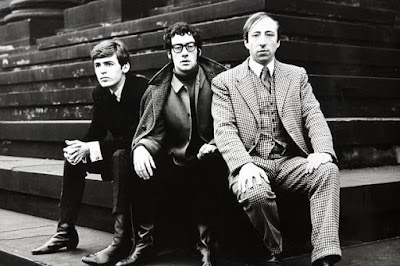 "Carry On Crow" is a bizarre piece. Sung by member John Gorman in his deep bass voice, it's an old folk song apparently called "Carrion Crow", cheekily re titled by The Scaffold. It's not something you'll want to listen to more than once.

Both sides are available in a host of out of print places on two CD's "Scaffold At Abbey Road 1966-1971" and another called "Thank U Very Much: The Best Of Scaffold".

Hear "Do You Remember":