Scaffold's seventh UK single was "Charity Bubbles" b/w "Goose", issued in June 1969 as Parlophone R 5784. It was issued in the States in September of that year as their fourth US seven inch.  As with all their American releases it did not chart.

The A-side "Charity Bubbles" is a bit more uptempo than the usual idiosyncratic Scaffold tunes, but it has a rocking backing with some female backing vocals and brass and it's a nice change from what they had previously done. It's infectious even if it's a terribly simplistic number! 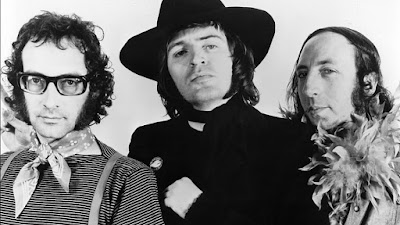 The real money for me is on the flip side "Goose", which should have been the A-side to this guys ears! Led by some tasty ivory tinkling by session man extraordinaire Nicky Hopkins it also reputedly features Mike's brother Paul McCartney on guitar. The real meat and potatoes of the song besides it's fantastic groove are the rapid fire lyrics that are savagely delivered about a trend hopping in-crowd interloper with such choice put downs "you say everyone is equal and you love them just the same, but the only person you can love answers to your name.." or "you glide around the pool a sort of hippie dippy queen, you think that you're a part of an imaginary scene...". It's easily one of my favorite Scaffold tracks and quite different from their usual "cheeky chappie" sing-a-long type songs.

Both tracks are available on the essential, still in print U.K. CD collection "Thank U Very Much-The Very Best Of Scaffold".