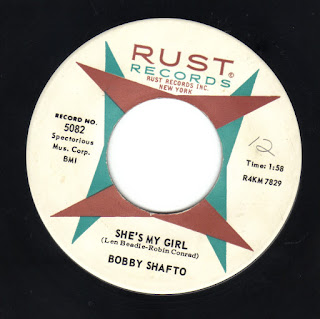 1. BOBBY SHAFTO-"She's My Girl" Rust 5082 1964
Bobby Shafto cut a number of innocuous pop singles in the UK and "She's My Girl" was his first (and in my estimation best) of his 5 US releases on the obscure Rust label. Led by a blistering guitar lick it reminds me of The Roulettes on one of their more upbeat sides.

2. ADAM FAITH & THE ROULETTES-"I Don't Need That Kind Of Loving" Capitol 5543 1965
Adam Faith released 12 singles in the US, three of them carrying The Roulettes in the credits. "I Don't Need That Kind Of Loving" was his final US 45 to carry a co-credit on the label and is my fave of them.  The backing by The Roulettes is raw and well executed and it's one of Faith's strongest vocal outings in my book. 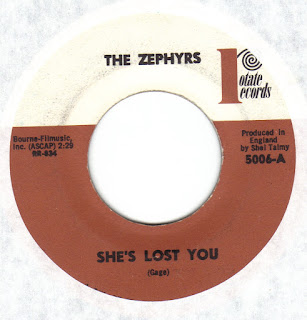 3. THE ZEPHYRS-"She's Lost You" Rotate 45-5006 1965
The Zephyrs cut a bunch of singles in the UK but the last three on Columbia are where it's at in my book. "She's Lost You" is a powerful number with call and response backing vocals,  combo organ (not unlike the early Animals) and a dance-able groove ! Produced by Shel Talmy. It was their first of two US 45's on the obscure Rotate label.

4.  BOBBY JAMESON-"All I Want Is My Baby" London 45-9730 1964
Cut in the London, US singer Bobby Jameson has a crack at one of Jagger/Richards earlier original compositions not recorded by the Stones with Andrew Loog Oldham at the dials. Any idea who's on it? I've read Bobby Jameson state it's Jimmy Page on guitar (sounds too way out to be Keef), but  I'm all ears to suggestions.  Backing personnel aside it's an amazing tune with beat group sensibilities

5. HEINZ-"Movin' In" Tower 253 1966
Originally cut in 1962 in the UK by Danny Rivers and The River Men (and produced by Joe Meek) ex-Tornado and Joe Meek's golden boy Heinz had a crack at it as his 11th and final 45 (UK Columbia DB 7942). The backing is positively raw with some chicken squawk guitar licks care of Meek's stalwart session guitarist Ritchie Blackmore. 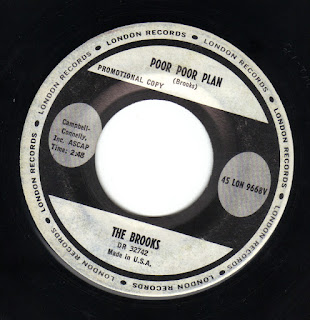 6. THE BROOKS-"Poor Poor Plan" London 45-9668 1964
Previously known as The Brooks Brothers, brothers Geoff and Ricky had been cutting 45's as a duo since the late 50's. For their final single they became The Brooks  and cut this up beat stomper on the flip of "Once In A While". With their tandem harmonies and rocking backing it comes off as a "with it Jan & Dean".

7. THE LANCASTERS-"Earthshaker" Titan FF-1730 1964
This crazy Ritchie Blackmore instrumental (which he penned with rock n roll cretin and predator Kim Fowley) was only released in the US on the tiny Titan label (a sister label of Demon records) and last went on Discogs for $511!! Expensive cost aside it's a frantic little rocker with thundering drums and insane guitar playing (slightly reminiscent of "Guitar Boogie Shuffle" to my ears). The other musicians involved were Blackmore's chums from The Outlaws.

8. THE FITZ AND STARTZ-"I'm Not Running Away" Capitol 5356 1965
Best known as the very first vinyl appearance of a young guitarist named Jeff Beck, "I'm Not Running Away" is a chirpy little slice of beat balladry with the aforementioned wiggy guitar runs from Beck and funky high pitched backing vocals with the obligatory double tracked lead vocals. 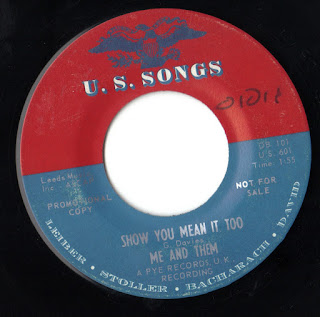 9.  ME AND THEM-"Show Me You Mean It Too" US Songs US 601 1964
Me And Them cut 3 singles in the UK on the Pye label, this was their second one issued in April of 1964 (it was issued here 5 months later). It's a raucous little rocker with some sax, call and response backing vocals and bursts of twangy guitar.

10. TOM JONES-"Chills And Fever" Tower 190 1965
Not to be confused with a later, re-recorded and much fuller UK version on Decca this version was cut by Joe Meek and slipped out in the US on Tower (along with another Meek production that you can read about here). Buried in echoed guitar and the typical Joe Meek rhythm section mud Tom's vocals sound like he's at the bottom of a well singing for his life!