An 18 year old Londoner of Greek Cypriot/Swedish heritage named Steven Georgiou was rechristened Cat Stevens and became one of Decca records new signings for their brand new off shoot label Deram. His debut 45 "I Love My Dog" b/w "Portobello Road" was launched in the UK by the company for their second single as Deram DM 102 in September of 1966. It was issued here in the US in November.

"I Love My Dog" begins with what would become a template for Cat's first few Deram releases utilizing the formula of a mid tempo pop song with gentle acoustic guitar accompanied by lavish orchestration (care of Alan Tew). It was produced by former Springfield's member Mike Hurst, who conned Decca's Dick Rowe into free studio time (as related here) to cut the track and gain it's release. It reached #28 in the British singles chart, and did nothing in the US where Stevens would have to wait until a label change and the next decade before he scored a hit but paved the way for further successful U.K. hits on the label. 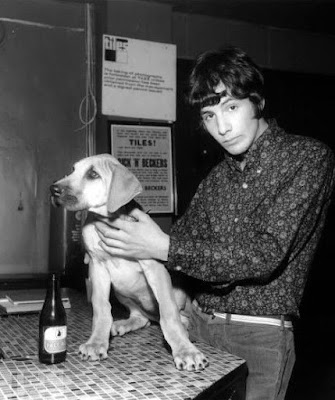 The flip "Portobello Road" was penned by Stevens with help from visiting American Kim Fowley. It's a sparse track with acoustic guitar with the lyrics describing the sights or London's famous street of used items and bric a brac.

Both sides are available as bonus cuts on the current CD issue of his debut LP on Deram "Matthew & Son".

I always assumed "I Love My Dog" was a bigger hit than it actually was. I guess memory can play tricks, but I always loved this song. I had it on a late 1960s vinyl Decca comp "The World of Hits Vol.2" – wish I still owned it!