We talked about the U.K. r&b quartet the Paramount's U.K. debut single way back when over here. Interestingly it received an obscure U.S. release on the short lived The Liverpool Sound label (it was the label's final release behind records by other non-Liverpool artists John Leyton and Mike Sheridan and the Nightriders). I would love to know the story behind this short lived, oddly titled British invasion cash in label! As most of you may know The Paramounts were the nucleus of what later became Procul  Harum. The band's members were: Gray Broker-Vocals/keyboards, Robin Trower-guitar, Diz Derrick-bass and B.J. Wilson-drums

Their version of The Coaster's "Poison Ivy" isn't bad (it beat The Stones out on covering it by a month), Gary Brooker's vocals are great as always, it's just that there isn't much else to it to hold one's attention or warrant repeated plays. Interestingly the Stones made favorable remarks about the band in the music press back in the day!

The "B" side, a cover of The Drifters "I Feel Good All Over" benefits from (once again) Brooker's smooth voice and a nice piano shuffle feel to it (a strong point of the band who were neither the gritty Pretty Things/Stones style r&B nor the mod/jazz of Graham Bond or Georgie Fame).  It's cheery and chirpy and one of my fave Paramounts tracks and like all of their numbers you can actually suss some sort of sense of "passion" for what they're doing. 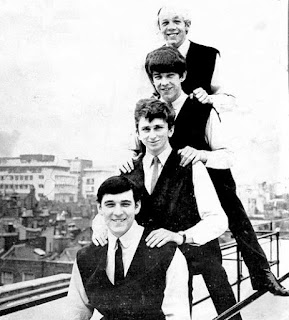 Both sides are available on the highly recommended Edsel LP/CD "Whiter Shades Of R&B" which compiles all of their 45 and E.P. tracks as well as some unreleased numbers and a rare French E.P. only cut.

Hear "I Feel Good All Over":