With the onslaught of Beatlemania in the United States there was eventually further interest in all things British, including bands from Liverpool (though mostly only hit makers, at first). The Swinging Blue Jeans had a respectable venture into the UK hit parade starting with their third single,  December 1963's release of a version of Chan Romero's "Hippy Hippy Shake" (His Masters Voice POP 1242) which rose to #2 on the British charts. It was the band's debut US release being launched in February 1964 where it became the band's sole Top 40 placing (#2) and subsequently the title of their only US long player (Imperial LP 9621).

"Hippy Hippy Shake" was first released in July of 1959 by Chan Romero on the Del-Fi label (interestingly it was simultaneously issued in the UK on Columbia as DB 4341). The track was covered by a host of other UK artists (the Beatles covered it in a BBC session long before the Swinging Blue Jeans version was recorded) but The Blue Jeans version remains the most well known.  It does not differ much from the original except that it's a little more frantic and sped up and does not have the gritty and greasy feel of the original. Of interest is that the Blue Jeans sing "the hippy hippy shakes" during the verses whereas the original version merely sings "hippy hippy shake". 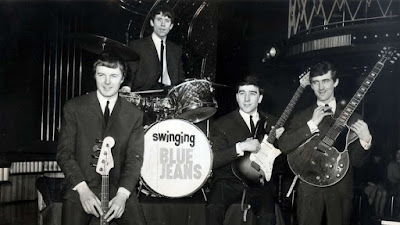 The flip side (the same as it's UK release) was an original "Now I Must Go" penned by lead vocalist Ray Ennis. Though it's not awful by any means, it's a fairly inoffensive and pedestrian mid tempo beat ballad.

Both sides have been compiled on several Swinging Blue Jeans compilations, the best place to hear it being the British EMI "At Abbey Road" CD and the American "Hippy Hippy Shake: Definitive Collection" collection.