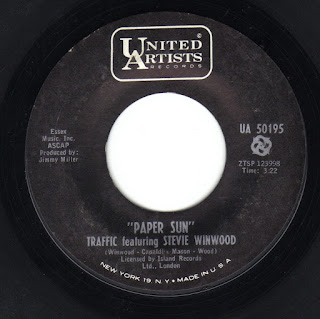 Emerging in 1967 when the term "super group" was being bandied about quite frequently in the music press, I can't say I ever thought Traffic were a super group. Other than Stevie Winwood coming from The Spencer Davis Group his band mates were all decidedly players on B-teams (no offense musically, I'm speaking purely from the commercial aspect). But rock n roll mythology likes to lump them together with everyone else. Regardless their debut was one of the finest singles 1967 unleashed.

Depending on what source you've read "Paper Sun", the debut May '67 45 by Traffic was written allegedly in a hotel lobby or a hotel room in Newcastle by Winwood when he was still in the S.D.G. and Jim Capaldi while he was in Deep Feeling (a band who never released any records but recorded some great material) .  My image of Newcastle is forever muddied by "Get Carter" a film from 5 years later so the idea of Traffic in their hippy garb in 1967 Newcastle must have been quite an unusual one as I imagine it was still all Brylcreem and winklepickers up there at that time. "Paper Sun" is a perfect Summer of '67 tune not just for all of it's sitar and conga trappings but lyrically it was already sussing the expiration date on the trippy hippie carefree lifestyle that was suddenly "the rage". Maybe I'm mis-hearing the lyrics, but that's my interpretation. There's the buzzing woodwinds creating a psychedelic Casbah feel meshing up against sitar scales and jarring tambura and tablas tapping, 1967 was here. Feel it. 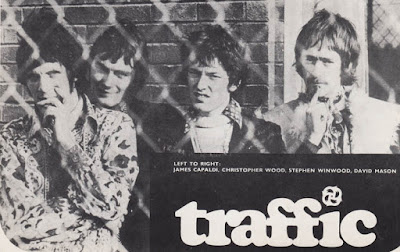 "Giving To You" starts with a cacophony of voices all shouting and chattering on top of each other before evolving into a mellow jazzy instrumental led by flute before some blistering  British blues guitar licks burst forth and then some B-3 notes slide in. It's interesting because it's a meld of bluesy/jazzy British r&b, a scene all of the band members were clearly moving away from with this band but clearly not far away enough from for them to still play it. 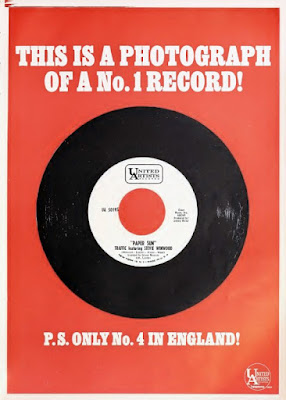 Trade advert for the single courtesy of 45cat.com
Both tracks are available as bonus tunes on the recent deluxe edition CD reissue of their debut LP "Mr. Fantasy".
Hear "Paper Sun":
https://youtu.be/bEnAft8bpBA
Hear "Giving To You":
https://youtu.be/sd7oD1kTMCI
By William - December 30, 2020