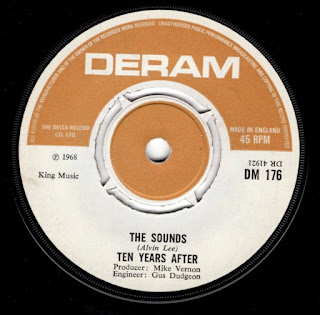 TEN YEARS AFTER-Portable People/The Sounds UK Deram DM 176 1968
For me Ten Years After will always be pretentious blues rock dinosaurs. Their untitled 1967 Deram LP debut is not without it's charm (with the jazzy organ instro "Adventures Of A Young Organ" or the jug band blues humor of "Losing The Dogs") but overall it failed to grab me in any major way. How strange is it that the band's debut LP was issued before they ever released any singles?  That single is today's item of interest. It was launched in February 1968 in the U.K. (a month later in the USA as Deram 45-85027). I've flipped it for our post because I much prefer the B-side.
"The Sounds" should have been the A-side. Forget any blues pretensions or 20 minute Slim Harpo covers, "The Sounds" is a full on freakbeat gas from start to finish. Curiously it reminds me a bit of Dennis Couldry's "I Am Nearly There" (UK Decca F 12734 issued the same month) with it's downtrodden, morose vocals with lyrics of mental confusion brought on by "the sounds". Is it about paranoia? A bad trip? A man who has just about had enough of life?  You decide. There's occasional bluesy but blistering guitar licks that burst out while the main verses feature a subtle organ and almost Gregorian chant backing vocals that gloomily plod along like a freakout dirge and it just builds and builds. The organ gets funkier and sound affects slowly start to pile on creating a brilliant cacophony of paranoia and confusion. It stops abruptly and slowly creeps back in for a few seconds. Positively trippy, man. 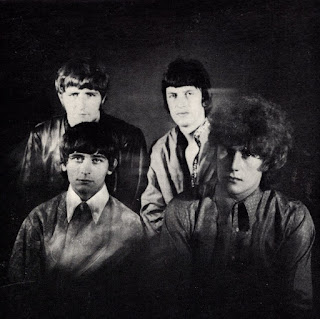 The A-side "Portable People" is not as groovy. It's not as bluesy as the bulk of their LP tracks but it's a laid back affair with music box piano tinkling away that reminds me of a light weight Lovin' Spoonful track or Canned Heat at their most plastic blues. Totally inoffensive but totally disposable too.
Both tracks are available on a deluxe Deram/Decca reissue of their debut LP that is still in print. 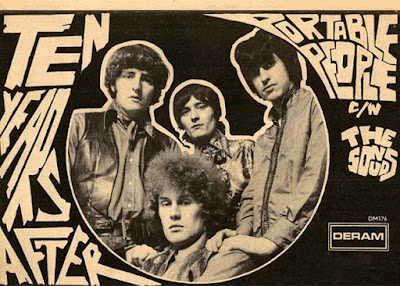 Email ThisBlogThis!Share to TwitterShare to FacebookShare to Pinterest
Labels: Deram, Ten Years After