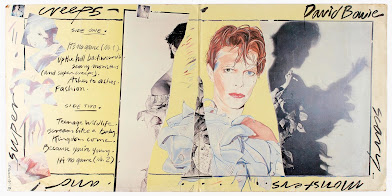 The "Scary Monsters" album is 40. Damn I'm old. It would be the last Bowie album I really enjoyed coming out in a magical time for me amongst other LP's I loved like XTC's "Black Sea", The Jam's "Sound Affects", The Teardrop Explode's "Kilimanjaro" et al. And though in retrospect he didn't need it, at the time I felt that it "validated" Bowie's existence amongst the whole coterie of new wave/punk/blitz kids whatever (as if there was some imaginary board of "Cool" sitting in judgement of such trivial things)! Recorded in early 1980 at NYC's Power Station with veteran Bowie  producer Tony Visconti at the helm (for what would be his last Bowie LP until 2002's "Heathen") it featured an array of guests, but we're not here to discuss that, you can read all about that elsewhere. But 40 years on it still holds up well and the opening bars of "Ashes To Ashes" will magically always transport me back to the bedroom I grew up in watching a video of it for the first time on "Rockworld" (and later "The Kenny Everett Video Show") on a tiny TV set with the volume down too low so as not to wake my parents.  And juxtaposed against that year's sounds of Ultravox and Gary Numan it germinated a "which came first the chicken or the egg" debate that still hangs in my thoughts. But soon it would be over as fgast as it came in. Goodbye Major Tom, hello MTV. Chart hits and financial success were just around the corner, but so was another three plus decades of mediocrity. But before all that it was "Ashes To Ashes", three minutes and thirty five seconds of genius.
In an earlier post I wrote this about "Ashes To Ashes":
"David Bowie has often been accused of being sharp enough to anticipate a trend and stealing from it before it became mainstream and getting it out there like he invented it, but he has also been credited with fostering lots of them. The bleak/nihilism of the so called "New Romantic/Blitz/Futurist" musical and fashion movement applied to Bowie in both of those situations.  He was canny enough to get in on the ground floor with the movement and used some of it's movers and shakers in the promo video for the track and yet without him one doubts the whole thing would have ever existed and therefore he played both parent and love child to movement. "Ashes to Ashes" is bleak, spooky and full of some positively eerie synthesizer parts whilst musically defiling the memory of dear old Major Tom from his first hit "Space Oddity".
And somehow it still remains the strongest track on the LP. The bleak and almost sinister synthesizers are a final note in what would be a musical year zero for Bowie after an almost musical three year period of musical silence as the world was left to wonder "What will he do next"?. 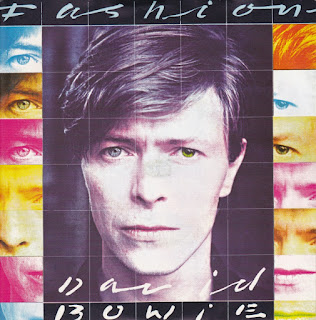 "Fashion" seemed almost American radio friendly with it's funky beat, but Robert Fripp's jarring guitars scotched any chance of hearing it book-ended between Billy Joel or The J. Geils Band on FM Top 40 radio (though it did in fact gain some airplay from AOR stations).  I remember one of my friends, Don Buchanan, gleefully exclaiming "He's singing about punk" when Bowie sang "There's a brand new dance but I don't know it's name, That people from bad homes do again and again. It's big and it's bland full of tension and fear, they do it over there but they don't do it here" in "Fashion". Like he'd spotted us in the audience and was waving to us, never mind that punk was already four years old at this point, we were clueless rural teenagers seeking any form of gratification AND validation that we could snatch, borrow or appropriate. And what of the lyrics? What did they mean? "WE are the Goon squad and we're coming to town". There are multiple schools of thought on this as referenced elsewhere on the Internet. Who were the Goon squad? Right wing fascists or so called "fashion Nazis", those pretenders of hip who decide what is "in" and what is "out" with the flick of a pen or stoke of a key.  I would be willing to lean towards the latter as the rest of the lyrics imply trends and smack of sarcasm and disdain for " the next big thing." as 1980 saw the 2-Tone movement and it's cousin the mod revival sputtering on their last gasps and the new romantics about to spring from their dark corner. As with it's 45 rpm predecessor "Ashes To Ashes" it has a kitschy video (also directed by David Mallet who did the brilliant "Ashes To Ashes" one). 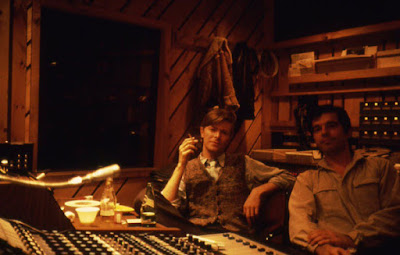 Bowie and producer Tony Visconti at the Power Station, NYC, NY during the recording of "Scary Monsters..."
The LP's title cut, "Scary Monsters (And Super Creeps)" vocally sees Bowie harking back to that British accent that he dared to use on his debut 1967 LP . His voice also sounds slightly like Richard Butler of The Psychedelic Furs in his disinterested tone. Again it's Fripp's shrieking guitars that power the track as Bowie sings in a detached manner about a woman going off the deep end..."when I looked in her eyes they were blue and nobody home.." pierced by an array of weird effects. Even the music itself seems to set the template for The Psychedelic Furs and a host of other quirky new wave bands. 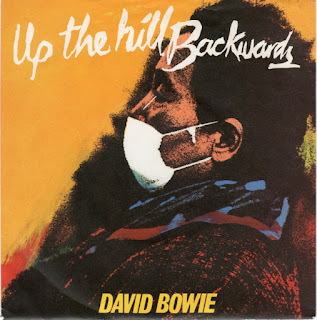 "Up The Hill Backwards" is a hark back to Bowie's post Ziggy soul boy phase, the multitracked vocals sound almost soulful like a blitz kid Voices of East Harlem but with again, Fripp's fret histrionics blowing it out. The track is truly a fish out of water with it's feel good mantra/chorus "up the hill backwards it'll be alright..." that sounds almost new age against the bleak nihilism that surrounds it on this album.
But for me "Scary Monsters (And Super Creeps)" would be Bowie's last great album and the one and only time I was aware AND appreciative of a long player he did. There would be a track here and there that caught my fancy over the remaining years, but nothing as consistent and as a whole like this album did.
By William - December 03, 2020