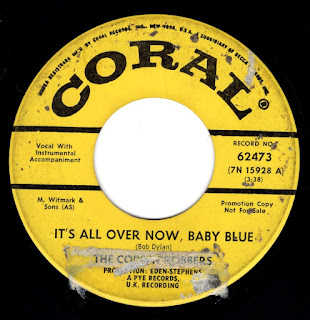 We first profiled Watford, England's Cops N' Robbers first U.S. release here. Our subject today is their third and final U.S. release on the Coral label (following the previous single, a bizarre choice of covering "I Could Have Danced All Night Long" on the label in August of 1965).

"It's All Over Now, Baby Blue" was of course penned by Bob Dylan and released on his March 1965 LP "Bringing It All Back Home". Cops N' Robbers hold the distinction of being the first British band to release a cover of it and possibly the first non folk artist to cover it as well!

When stacked before Them's 1966 version (and The Chocolate Watchband version that followed it) it might pale because it's certainly not as strong as either subsequent version. Backed by a somber organ and extremely low volume bass/drums/guitar it's reminiscent of The Artwoods in one of their moodier moments (especially during the organ solo). That said it's a decent interpretation. 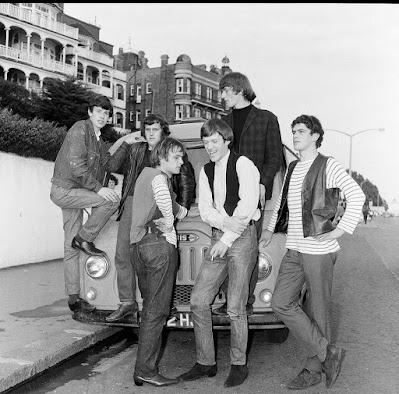 The flip, "I Found Out", is moody little number that takes a few listens to appreciate. The lead vocalist reminds me of Dave Berry on it and again their tranquil organ really cinches the track for them. It was written by band member's Brian "Smudger" Smith and Terry Fox (responsible for "You'll Never Do It Baby", covered by The Pretty Things on their LP "Get The Picture" and by Cops N' Robbers on a rare French E.P.).

As of yet there has yet to be a legit Cops N' Robbers compilation released.

Hear "It's All Over Now Baby Blue":