The Herd: From The Underworld 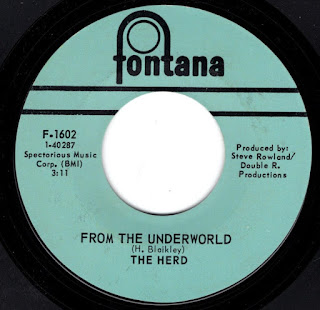 THE HERD-From The Underworld/Sweet William US Fontana F-1602 1967
Peter Frampton's four piece band The Herd released six singles in the U.K. on Fontana, four of which were issued in the US on Fontana. Today's subject was his  second 45 for the label both here and in the U.K. (as TF 856 in the UK in August 1967 and here in October). It reached # 6 in England, but like all of their releases here, failed to chart.
Penned by songwriters Alan Blaikley and Ken Howard, they wrote a number of cuts for the Herd as well as most of the output by Dave Dee, Dozy, Beaky, Mick & Tich. They are miscredited as "H. Blaikley " on this release, a common error that frequent saw them paired as "Howard Blaikley" on several releases.
"From The Underworld" was my introduction to the band on a cassette tape comp made by the legendary Ron Rimsite in 1985. It begins with the sound of church bells followed by a neo classical piano melody and a burst of distorted guitar and sublime choral voices giving it a regal feel. Frampton's double tracked lead vocals are accompanied by sawing strings and later multiple layers of horns giving it a completely over the top, opulent feel that's amazing and rich. One wonders how the hell the band (guitar, bass, organ, drums) managed to pull this off live!?! 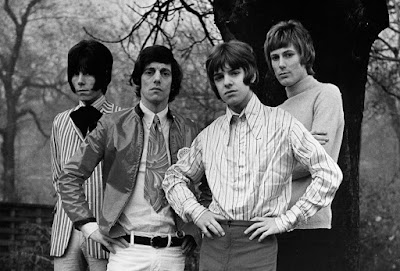 The flip, "Sweet William" was penned by Frampton and keyboard player Andy Bown.  Lead by some jazzy B-3 Hammond it's mildly entertaining but something about it comes off as disposable and run of the mill to me.
Both sides are available on a host of Fontana CD collections of the band's slim discography (six singles, one LP).
Hear "From The Underworld":
https://youtu.be/YUa9p92TjjA
Hear "Sweet William":
https://youtu.be/qAogzDeTtkA
By William - February 18, 2021