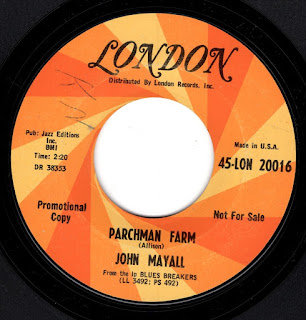 JOHN MAYALL-Parchman Farm/Key To Love US London 45-20016 1966
John Mayall's debut U.S. single was launched in November 1966 with two cuts from his legendary "Blues Breakers" album (U.S. release London PLS-3). It was his fifth single in the U.K. where it was released in September 1966 as Decca F 12490 and credited to "John Mayall" on the A-side and "John Mayall and the Bluesbreakers" on Side B (the U.S. pressing fails to credit the Bluesbreakers on Side B).
Willie Dixon's famous "Parchman Farm" was a staple of every self respecting British 60's r&b band's set, often via Mose Allison's 1958 recording. It was covered in Britain by Duffy Power, Georgie Fame, The Nashville Teens, Peter Jay and The Jaywalkers and Manfred Mann in a live BBC session before Mayall's version was released. Mayall's version is primarily driven by his 100mph harp blowing and vocals with just minimal backing by drummer Hughie Flint keeping a steady, but unobtrusive beat. When I saw Mayall in 2014 he performed the track solo with just his voice and harp at the same breakneck speed, nothing short of a mean accomplishment for a man of 80 years old at the time! 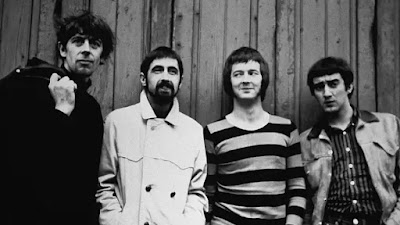 The flip side "Key To Love", a John Mayall original is another 100 mph tour de force. It's fattened up by the horn section of Alan Skidmore on saxophone and Dennis Healy on trumpet, and then of course there's Eric Clapton's blistering solo. It's breakneck, upbeat delivery is at odds with the majority of tracks on the "Blues Breakers" album but what a track!!
Both sides of course are available on the above mentioned "Blues Breakers" LP.
Hear "Parchman Farm":
https://youtu.be/I5WZx1U48ZM
Hear "Key To Love":
https://youtu.be/zYbTKquyZPE
By William - February 04, 2021