My introduction to Wimple Winch's "Rumble On Mersey Square South" came visa Mick London of the N.J. 80's mod band Mod Fun. He recommended Bam Caruso record's "Rubble" compilation albums. My friend Rudie and I traveled to Vintage Vinyl in Woodbridge,NJand  he bought the "49 Minute Technicolor Dream" (Rubble 4) and I snagged "The Psychedelic Snarl" (Rubble 1). On "The Psychedelic Snarl"  were three tracks by a Liverpool quartet called Wimple Winch: "Atmospheres", "Save My Soul" and "Rumble On Mersey Square South". It was the latter which struck me immediately.

Wimple Winch evolved out of a mid 60's Liverpool beat group called The Four Just Men (a name change was later necessitated as there was a TV series of the same name so the band became The Just Four Men). The band released three singles in the U.K. on Parlophone before changing their name to Wimple Winch in late '65 when a writ was served because there was already another band using the name. The band signed to Fontana where they released just three singles in the short space of just nine months, all of which change hands for huge sums of money these days. "Rumble On Mersey Square South" would be their final release issued in January 1967 as Fontana TF 781. It is of course one of the most sought after singles of the freakbeat genre as a look at this popsike.com entry will attest to. 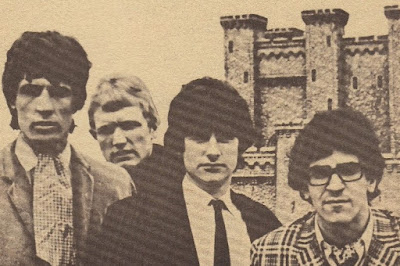 "Rumble On Mersey Square South" is like a gritty Scouse "West Side Story" of sorts with so many breaks and tempo changes and chronicles a fictional gang war battle between the Gasworks gang and "the gang from the West". With Liverpool's "tough" reputation in the 60's it's plausible that the band witnessed such violent scuffles first hand and need not have resorted to imagination. The lyrics are purely amazing coming across like a script to an unnamed gang war movie or an essay from an onlooker hidden from view, like a less sophisticated Dick Hebdige :

My late great friend Don "Woody" Buchanan, though not a purveyor of 60's music like yours truly immediately pointed out that the track reminded him of the Zombies, vocally. Years later I realized that it was musically similar as well, some of the guitar bits were almost reminiscent of the band's freaky June '66 single "Indication". There's subtle bursts of distorted/fuzz guitar, thundering bass and an eerie echo on the drums that give it a desolate feel that make you feel like you're in some vacant, abandoned industrial estate. There's multiple rave up's where the band cuts loose only to cool things down and pull it back to the mellow, Zombie-esque quieter interludes. The structure of the song is delivered like acts in a play, and though I hate to use such hackneyed old rock n' roll phrases, the term "rock opera" can certainly be applied!

Sadly Wimple Winch would not make any other records and "Rumble..." would be their final release. The band recorded a host of demos in 1967-1968 (the later of which saw them assisted by Herman's Hermits members Keith Hopwood and Derek "Dek" Leckenby) before finally calling it a day. All of their recorded works were compiled by Bam Caruso/RPM records in 2009 as a CD compilation titled "Tales From The Sinking Ship".